For nearly two decades, Alain Labrique, Associate Professor at the Johns Hopkins Bloomberg School of Public Health and Director of the Johns Hopkins Global mHealth Initiative has been working on ways to reduce the high rates of neonatal mortality experienced by populations across South Asia, with a focus on Bangladesh - a country where he was born and raised. He and his mother, a schoolteacher from Kolkata, India, nearly joined the tragic statistics of elevated (and often preventable) maternal and newborn death - due to obstructed labor and postpartum sepsis that was poorly managed by a low-resource hospital in the capital of a nation recovering from a terrible war of independence.  This personal narrative, combined with the tragic reality that each day hundreds of newborns die across South Asia, drives Labrique and others to find innovative ways to stem the tide of mortality. The first challenge, in remote, rural Gaibandha, where Labrique was part of the JiVitA research team, was to figure out how to get to neonates when they were most vulnerable - in the hours after birth. A study where newborns had to be characterized on the first day of life, gave them opportunities to test innovative ways to reach moms and babies.

The concurrent 'epidemic' of mobile phones penetrating even the most rural parts of Bangladesh gave Labrique and his team an opportunity to test a new idea. "We had pioneered this mobile phone-based notification system, where families could let us know...that mothers were going into labor, allowing us to send skilled nurse midwives out to the home," Labrique described. The system worked spectacularly well, allowing nearly 90% of moms to be reached before birth by skilled health workers, in a context where over half of the births take place at home. Skilled birth attendants can address some complications that arise at birth, but there is still a vulnerable window of several weeks after the baby is born, under these conditions, when the risk of infection and death loom large. Reflecting on the urgency of the problem, the inadequate number of health workers to cover a growing population, and the opportunity of exciting new technologies, Labrique began looking for faculty and students across Johns Hopkins to work with on creative solutions. With colleagues and students from the Johns Hopkins Whiting School of Engineering, School of Medicine, and School of Public Health, this new "Mortality Busters" team began exploring ways to identify newborn distress signals. Mining the data collected from over 15 years of research in JiVitA, Whiting and Bloomberg students tried to apply machine learning methods to identify predictors of poor outcomes. Labrique teamed up with Azadeh Farzin, a neonatologist at the School of Medicine, also working on predictive algorithms for neonatal infection. The team pored over 1000's of painstakingly collected verbal autopsies, accounts of the days and hours before an infant's death, to identify any missed opportunities for intervention... "We realized that often, parents struggled to recognize the severity of their baby's illness - they sought care from multiple sources, ranging from traditional healers to government hospitals -- usually long after symptoms had begun, and moreover, before they had been visited by a formal health worker."

"[We] started looking at ways to task-shift, "he continued. "We understood that health workers, at best, get a tiny glimpse into the 7-14 day window of time when babies are at greatest risk. Mothers and family members, on the other hand, are there during the whole period. Could we provide them with a way to identify a newborn in distress and in need of urgent care?" Signs like "chest indrawing", an indicator of life-threatening pneumonia, are difficult for trained health workers, let alone non-medical professionals to accurately recognize or report. Perhaps a low-cost, reliable and easy-to-use sensor, connected to a mobile phone might empower families to check their newborn's simple vital signs periodically, multiple times a day - far more than would ever be possible given current numbers of health workers.  Teaming up with the Johns Hopkins Center for Bioengineering and Design (CBID), Labrique and Farzin began working with Soumyadipta Acharya on mentoring graduate design teams to build and test prototypes that might work in the toughest, remote settings.

Fast forward several years, and this work has blossomed into NeMo (Neonatal Monitoring), a mobile-based sensor prototype and notification system that recently won a $100,000 Grand Challenges Exploration award  from the Bill and Melinda Gates Foundation. Each year the Foundation selects five groups presenting daring research to address specific global health challenges. The team is currently headed by Acharya, and includes several original members, including Labrique, who received a Global Established Multidisciplinary Site (GEMS) grant  from the Johns Hopkins Center for Global Health that supported components of the preliminary work. Since 2014 the CGH has offered GEMS grants to support collaborations between Hopkins faculty and their local partners in a low- or middle-income country. The hallmark of the program is the requirement that teams must include students from multiple Hopkins divisions, allowing for exposure to different ways of thinking and potential for innovation. From its inception the program has funded 66 students at seven sites in South Africa, Peru, Uganda, India, Bangladesh, Haiti, and Mali. Describing the arc between the work from two GEMS awards to NeMo, Labrique noted that GEMS allowed the team to bring the initially separate components and perspectives into one space: "Part of what makes a GEMS approach exciting is it enabled us to take a lot of these discrete pieces that we were mulling over and bring them together ...an accumulation of small epiphanies that you can bring together as a concerted, interdisciplinary initiative. This is what helps move innovations forward in leaps and bounds." In a village outside of Kisumu in Kenya, Andrew Jann shows an early NeMo device prototype to CHWs for usability and device training feedback, as Chanya Elakkad documents their replies. Photo credit: Kelly YiQiao Li, August 2016 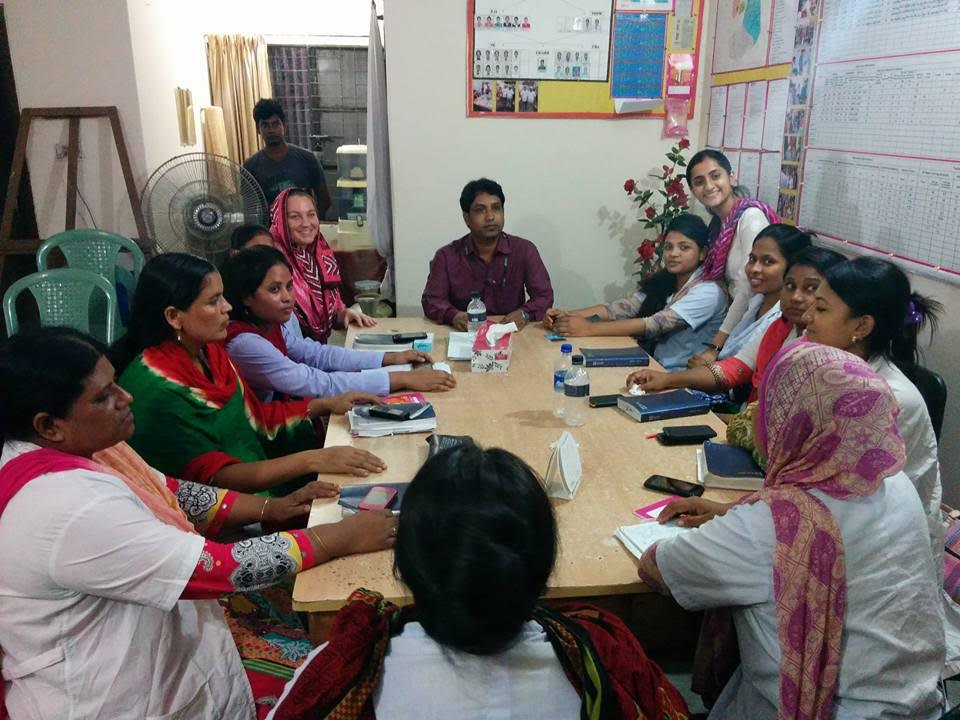