On September 1 Dr. Jean Anderson will be retiring from her full-time faculty position in the Johns Hopkins School of Medicine in the Department of Gynecology and Obstetrics. The following was written by Andrew J. Satin, MD, FACOG, in an email announcing Dr. Anderson's retirement. 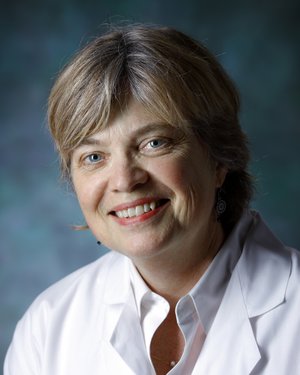 In the department’s history, spanning over 130 years, Jean is the second woman to be named as a University Professor.  She is unanimously approved by the ABMF and the Board of Trustees as a Professor Emeritus.  From the beginning of her career Jean was drawn to the poor, the underserved, and those with health disparities. Not long after she arrived she found her true calling; it was still early in the HIV epidemic and as the disease shifted from gay men to include women and injection drug users, and perinatal transmission was recognized as a major HIV transmission route.  Dr. Anderson began offering gynecologic services in the adult HIV clinic in late 1987.  In 1988 she wrote a short proposal to the Maryland Department of Health and Mental Hygiene and received funding for what became the Johns Hopkins HIV Women’s Health Program. This program, which she continues to direct, has been continuously funded since then and has served over 5000 women living with HIV for comprehensive gynecologic care and over 600 pregnant women living with HIV. There have been no perinatal transmissions among these women in well over a decade. The program is considered a model of care for HIV-infected women, including providing comprehensive HIV care during pregnancy and reproductive health care integrated into an adult HIV setting; it was among the first such programs to use community health workers, including women themselves living with HIV, as HIV counselors and outreach workers.

Dr. Anderson is a recognized national and international thought leader in the field of HIV; she was an inaugural member of the US Public Health Service (USPHS)/Department of Health and Human Services (DHHS) Guidelines Panel on Clinical Practices for the Treatment of HIV Infection in Adults and Adolescents, as well as the Panel on Treatment of Pregnant Women with HIV Infection and Prevention of Perinatal Transmission, on which she still serves. She serves or has served on numerous other national committees or working groups related to HIV care for the CDC, NIH, HRSA, The Infectious Diseases Society of America (IDSA) and ACOG. She is currently the co-chair of the CDC/HRSA Advisory Committee (CHAC) on HIV, Viral Hepatitis and STDs. She was the keynote speaker on Antiretroviral Therapy in Pregnancy at the Ryan White Annual Clinical Conference in December 2019. Internationally, she has been an advisor/consultant on HIV to the Ministries of Health in Brazil, Jamaica and Zambia and to the World Health Organization.

Her work internationally in HIV has led her to a larger global engagement. She has been a senior technical advisor to Jhpiego since 2000 and in that role was the PI of the CDC University Technical Assistance Program from 2002-2010, providing technical assistance to the CDC Global AIDS Program and country CDC offices in 6 countries in sub-Saharan Africa. She is also currently the PI of an NCI-funded clinical trial testing the safety and efficacy of a new cryotherapy device for the treatment of cervical dysplasia conducted in the Philippines and in India.  Dr. Anderson has been an active scholar disseminating information with over 100 peer reviewed publications, more than 30 book chapters and she was the editor for A Guide to the Clinical Care of Women with HIV Infection, which had 3 editions.

Dr. Anderson has been the proverbial quadruple threat. She is an outstanding clinician, educator, scholar, and advocate.  She has given lectures and grand rounds to physician and nursing providers around the country and around the world. She was Director of Medical Student education in OBGYN: from 1988-1995 and course director for OB/GYN Clinical Skills, 1991 – 2003. She has been faculty on numerous CME courses and organized/directed several related to the care of women living with HIV. She developed a pelvic and perineal anatomy dissection course for house-staff in Gynecology and Obstetrics in 1993, which was subsequently developed into a CME-accredited Surgical Anatomy Workshop, which she directed. This was held as part of the long-running Houston Everett Urogynecology Course from 1999-2008. She has been a mentor to numerous medical students, residents and fellows and has served on or chaired thesis/dissertation committees for 16 graduate students in the Schools of Public Health or Nursing. Over the course of her career at Hopkins she has received 10 teaching awards from the OBGYN residents, and in 2017 was inducted into the Johns Hopkins Distinguished Teaching Society.

Dr. Anderson has been a valued contributor to the department and to the institution administratively. She was Director of the Division of Gynecologic Specialties from 2005-2019 and during that time she inaugurated two new fellowships in Minimally Invasive Gynecologic Surgery and in Global Women’s Health. At the departmental level she has served on numerous committees, currently including the OBGYN Research Committee, Gynecology and Obstetrics Promotion and Tenure Committee and the Gynecology and Obstetrics Awards Committee.  At the School of Medicine she is currently co-chair of the Ombudsman committee and a member of the Student Promotions Committee. She has been a member of the Board of Directors for the Johns Hopkins chapter of AOA since 2006.

Finally, she has been recognized by being awarded the Constance Wofsey Women’s Health Investigator Award, presented by the AIDS Clinical Trials Group, and received the Donna Vogel Women’s Health Champion Award. In 2003 she was a featured physician in the “Changing the Face of Medicine” exhibition at the National Library of Medicine honoring the lives and achievements of American women in medicine. In 2020 she was named the Vanderbilt Medical Alumni Association Distinguished Alumna.

Dr. Anderson’s accomplishments have brought great credit to her Division, Department, and Johns Hopkins Medicine. She has touched our lives and made us and the world better.