Over the past decade, plant breeders have made considerable progress towards the development of nutrient-rich staple crops. These include a number of conventional maize hybrids with provitamin A carotenoid contents up to 20 times greater than regularly consumed white varieties. “Provitamin Amaize” or “orange maize” is currently being rolled out in Sub-Saharan Africa as a strategy to reduce the prevalence of vitamin A deficiency, which remains a major public health challenge. JHSPH, in collaboration with the Zambian Ministry of Health and the University of California at Davis are conducting efficacy trials of orange maize in rural Zambia. This is the 3rd in a series of trials and will consider impact on maternal vitamin A status (serum & milk retinol; dark adaptation) and infant vitamin A stores (total body stores).

In my last week of my internship, I found myself standing in the front of Mkushi district’s most prominent health officials presenting the aim of our project and the value it had for the community. “I know my accent can be difficult to understand,” I began, “so if at any point you don’t ‘get me’, please stop me so I can clarify.” I heard some chuckles and saw some nods around the room. I thought about my first presentation, when my audience, more accustomed to the British and South African English accents, found themselves rather perplexed by my American cadence. It wasn’t until some time after the presentation that I was told, “We didn’t get you… we were reading the PowerPoint!” So in my final presentation, I was equipped with several British phrases and alternate pronunciations to better ensure my audience could understand me. Modifying my own speech patterns to improve communication was just one thing that I learned during my time in Zambia.Thinking back, it seems almost unbelievable how much I learned and accomplished in such a short time. Two months earlier, I wouldn’t have even been capable of explaining the importance of the micronutrient vitamin A. Two months earlier, I had accidentally purchased 10 feet of sugarcane in a rather embarrassing interaction outside of an agricultural fair. This past summer was the first time I had worked in research outside of a laboratory environment and the first time that I had lived for an extended time in a developing country. I was worried that I was underprepared an that enthusiasm and perseverance might not be enough to make the most out of my time working abroad.

However, I found that what I lacked in experience I could amend by learning quickly. I spent a full week of observing and asking questions. I was fortunate the staff already on the ground were so helpful and patient with me in that first week. After that, I began working with another undergraduate student on drafting work flow proposals to the child health clinic and planning training sessions for the staff that would assist with out trial’s registration and surveillance processes. I edited the manual of operations for our registration activities. In the last two weeks of my experience, I was able to begin the implementation of an electronic registry system at the child health clinic with very little supervision. I had become an expert on the workings of the clinic and had successfully relieved some difficult tensions between the clinic staff and our project’s staff. It was a weird feeling to be consulted before other decisions were made regarding the project. I was surprised that I was capable of contributing so much.

A very integral part of my experience was a fellow undergraduate from Hopkins that was placed at the same site as I. I was, again, very fortunate to have met and worked with this student – despite having similar interests, being in the same class, and even in the same major, we had never before crossed paths. Outside of work, we got along amazingly well (this was especially a blessing because we lived together), and were able to encourage each other to explore the surrounding area more carefully. In work, we were always able to keep each other on track, explore different ideas to improve the project’s proceedings, and remember things that the other had forgotten. I think part of the reason I was able to accomplish so much this summer was because of the support I received from my Mkushi counterpart.

This really only scratches the surface of what I learned in Zambia, but for me it was an opportunity that came with a lot of personal growth, and has left me with a positive outlook on my decision to pursue a career in global health in the future.

On one of our training days, we prepared food that would be served in the upcoming trials in order to test the recipes. This is one full day’s serving of nshima made with orange maize, along with samples of 4 relishes: (from the left) groundnut and rape, egg whites, beef, and okra. 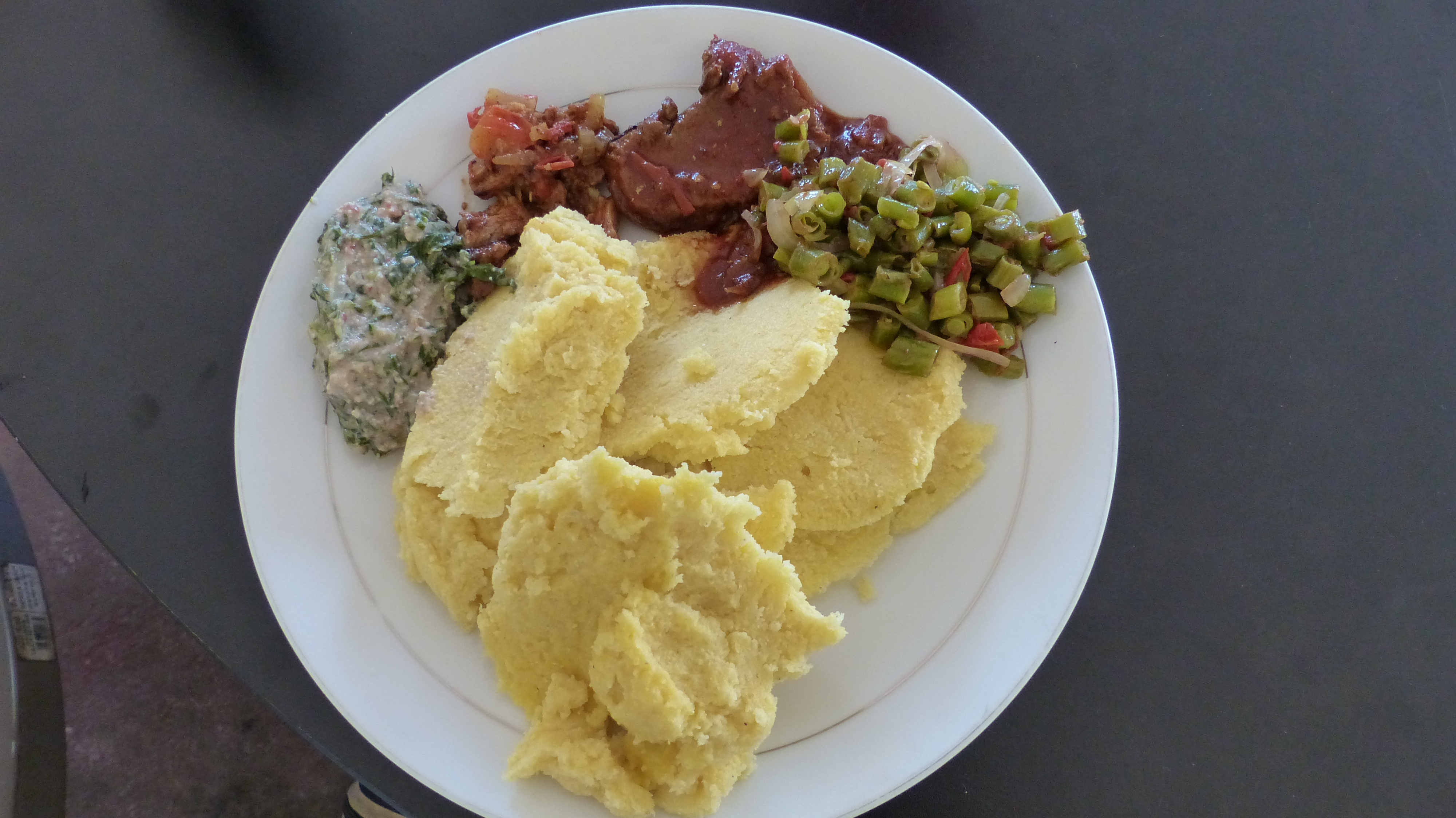 In this photo, the future clinic staff are learning how to weigh and measure infants. Each child must be weighed and measured 3 times to ensure accuracy in measurement. On the right is an instrument used to measure infant length. 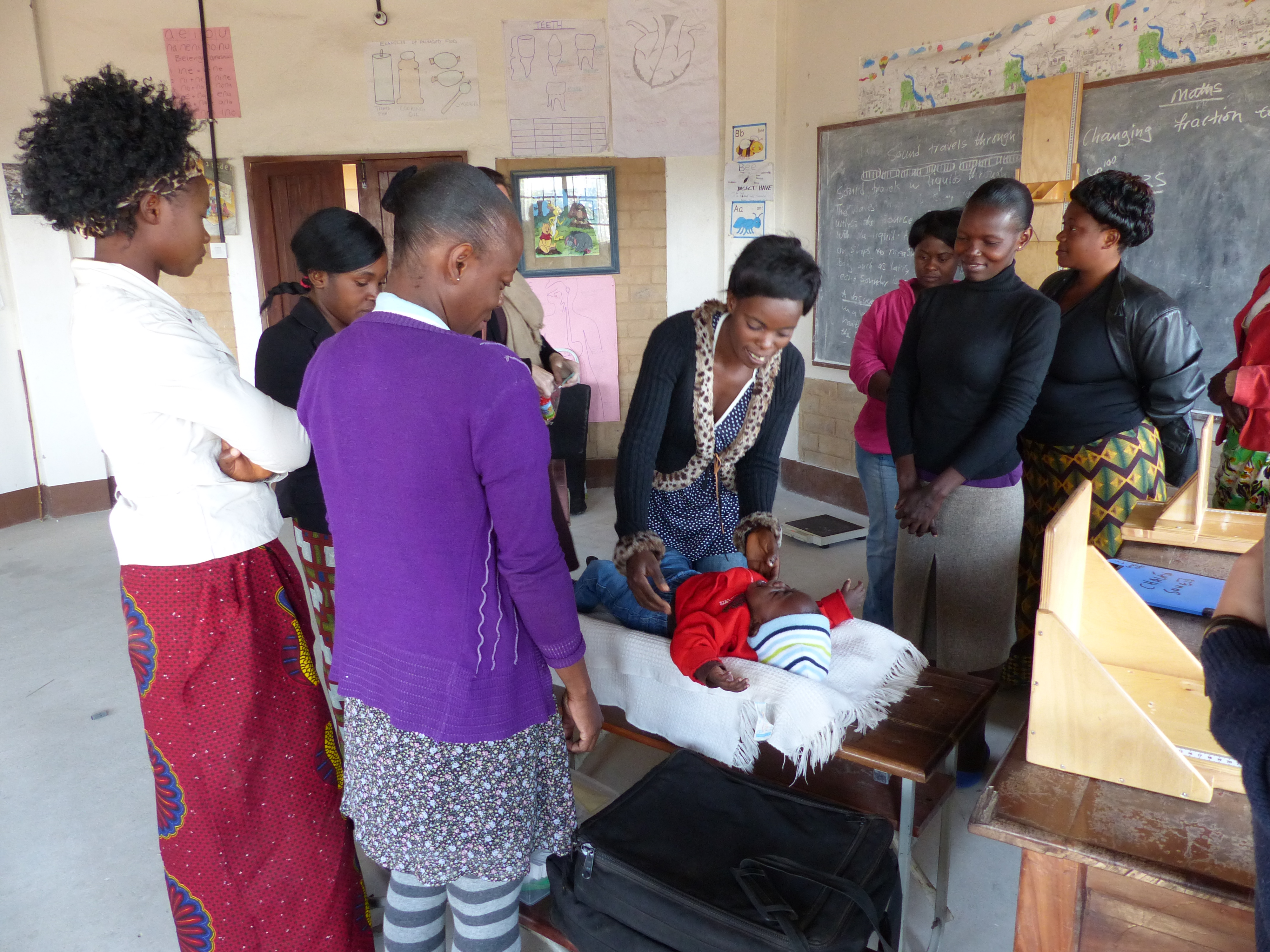 This is a typical day at the Under 5 Clinic. Since the changes in the workflow were implemented, mothers are able to sit more frequently and move more quickly through monthly weighings and immunizations. Though it may look chaotic, it was considerably less chaotic than when we first arrived. 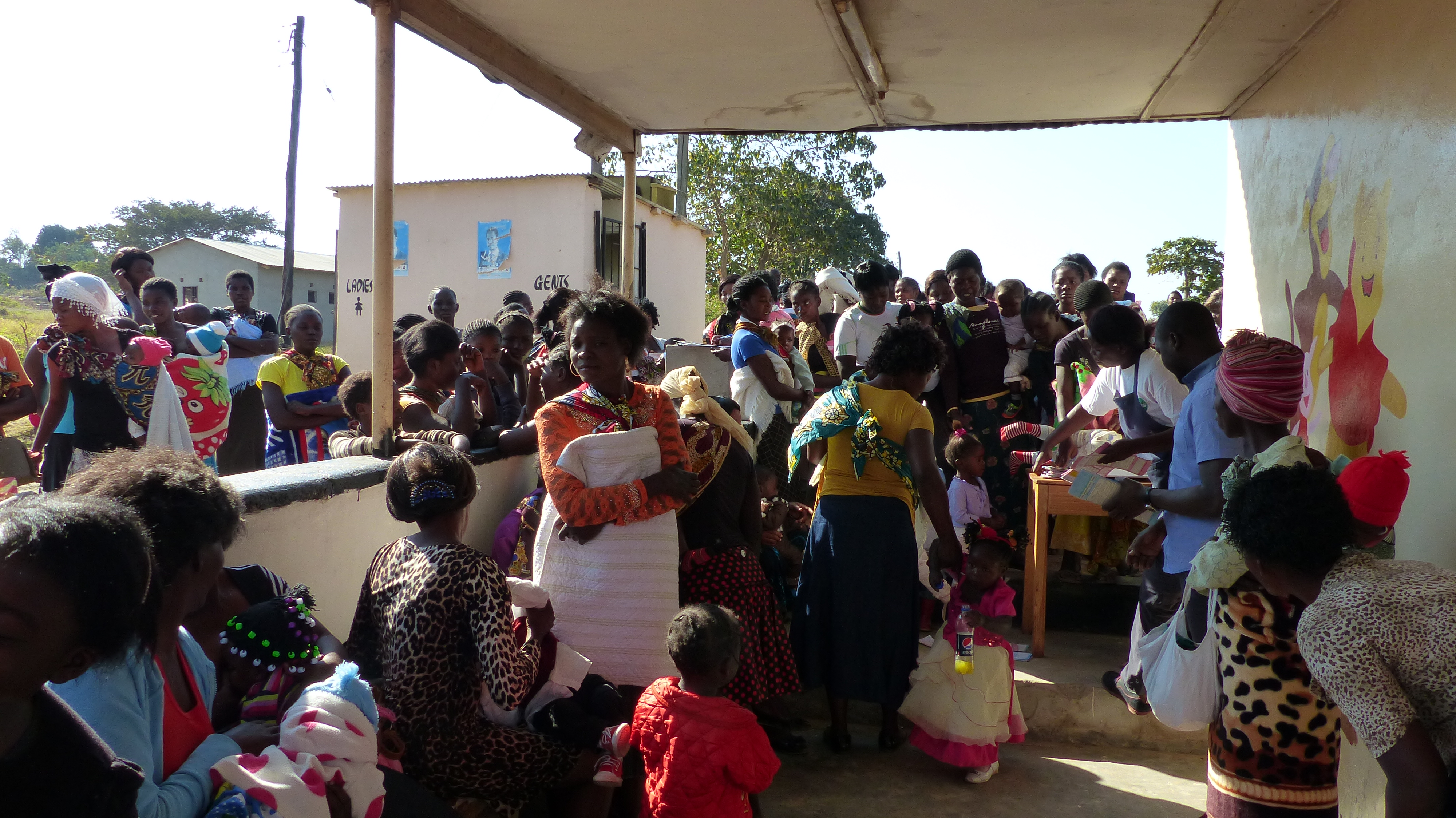 Our registry clerks copying information from individual child health cards into an electronic registry. This helped expedite clinic registry-keeping and helped our study generate an accurate count of infants by age and neighborhood. 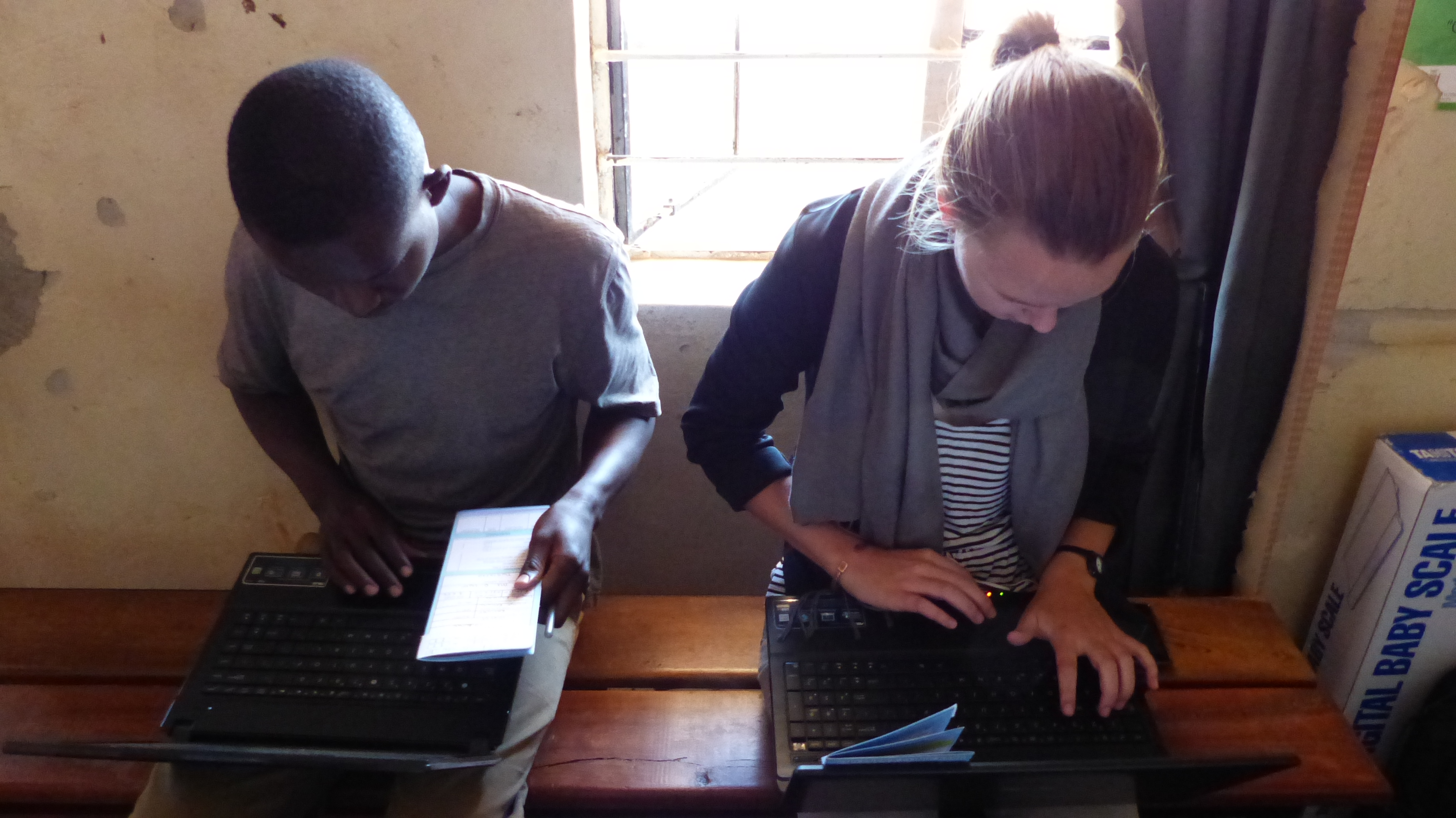 Our project staff threw a small party for Benita and I on my last day of work - our first time having Zambian pastries! 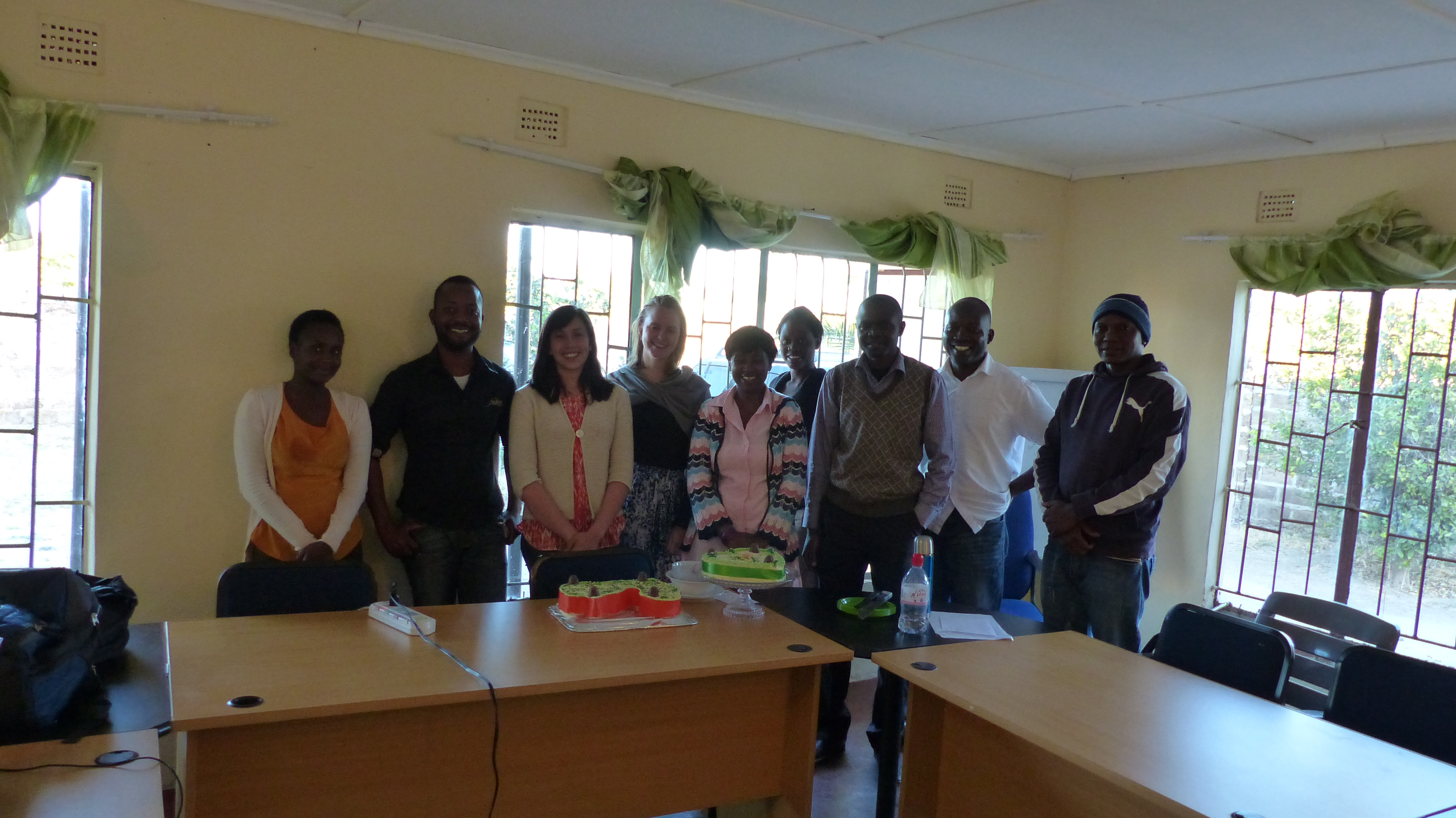