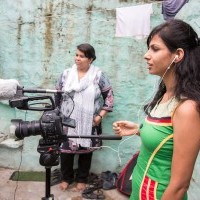 Varsha Ramakrishnan, a physician from India, and JHSPH graduate, was the inaugural recipient of the 2013 Johns Hopkins-Pulitzer Center Global Health Reporting Fellowship.

The fellowship, which includes up to a $5,000 stipend, is a collaboration of the Bloomberg School and the Pulitzer Center on Crisis Reporting. It offers public health students the opportunity to work with seasoned journalists at the Pulitzer Center and document important issues in global health.

Varsha proposed writing about dowry violence after seeing a hospital burns ward in Karnataka that was always full of young brides who had been attacked by their husbands or in-laws. "Although the practice of a bride’s family paying a dowry to the groom has been outlawed in India, the tradition and the violence associated with it persists," Ramakrishnan says. “The immolation of young brides within the first few years of their marriage is a heart-breaking phenomenon that is severely under-reported. It is my intention to illuminate the extent of this problem and increase awareness.”

Her article, "A Broken Promise: Dowry Violence in India" was published in the Johns Hopkins Public Health magazine in the fall of 2013. You can read her full article here. This article received awards from the Society of Professional Jouranlists and the Robert F Kennedy Center for Justice and Human Rights.

The article won the Robert F. Kennedy Award for College Journalism, which honors reporting on human rights violations and analysis of efforts to foster positive global change. Ramakrishnan accepted her award from Ethel Kennedy, widow of Robert F. Kennedy, during the May 22 RFK awards ceremony at the Newseum in Washington D.C.

Ramakrishnan, also won the national first-place Mark of Excellence Award from SPJ for her story, which was selected from 12 regional winners in the Non-Fiction Magazine Article category. The Mark of Excellence award recognizes the best collegiate work published or broadcast in 2013.

After she was awarded the Hopkins-Pulitzer fellowship, Ramakrishnan returned to India to document dowry violence and how it affects women in all levels of society. Although seeking a dowry from a bride’s family has been illegal since 1961, women who enter a marriage without enough of a “groom price” are often subject to physical, mental or sexual violence. More than 8,200 dowry deaths were reported in India in 2012.

More about the Fellowship