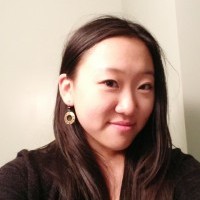 The Johns Hopkins International Injury Research Unit (JH-IIRU) is currently working with faculty at the Makerere University School of Public Health (MUSPH) in Uganda to strenghten research capacity on the long-term health and economic consequences of trauma, injuries and disability (Chronic TRIAD) across the lifespan through an innovative model of sustainable capacity development. Together we have established a track within MUSPH's MPH program for the study of TRIAD across the lifespan; and have now enrolled our 2nd cohort of students. Additionally, JH-IIRU and MUSPH faculty hold joint workshops (both "basic" and "advanced" ) on a range of TRIAD-related topics 2x annually and provide techincal assistance to local stakeholders working for ministries or NGOs which work in the area of injury prevention and or disability/rehabiliation. In 2014, the MUSPH-based Chronic TRIAD faculty were awarded two grants to conduct research on knowledge, attitudes and practices of commercial motorcycle drivers in Kampala, and implement a drowning prevention program among fishing communities in the Lake Victoria basin.

On my way from the airport in Entebbe to Kampala city, I had a most interesting first encounter with Uganda, when I was so shocked by two scenes of the streets: the unbelievably crowded streets full of cars and groups of police and security personnel walking around with rifles. Before I came, I had a vague imagination of the daily life in Uganda based on my experience visiting Cambodia, Laos, and villages of China and in my mind motorcycles and bicycles should be the predominant type of transportation here. I was partly right about motorcycles, called Boda-Bodas here, but horribly wrong about cars. I have never seen anything quite like the Kampala traffic in any other place I have lived. To get to work by 8 in the morning, my colleague and I would have to leave at 7 sharp if not earlier to avoid the traffic jam, and arrive at 7:15 because it is only a fifteen-minute drive. In that same imagination, I also did not see that this is such a heavily policed state, where people and vehicles are being inspected before entering public buildings such as malls, banks and the airport.

Working and living in Uganda for two months, I did many things that I have not thought of doing and gradually got used to them. I have a remote recollection of being bathed in a basin when I was very young before water heater became a household appliance in China. On my second day in Uganda, I moved to the guestroom of my homestay family and no hot water runs in the shower because few would stay in the room throughout the year. The next day I received a kettle with which I started my two-month “hot water bucket-shower challenge.”

My experience of commuting through the Kampala traffic did not end with just leaving home early. I do not own a car and in the first weeks I was given a daily lift by a colleague of mine who later could no longer do so because of early or late meetings and taking a leave. The distance between home and work was 5 kilometers (roughly 3 miles) and I had three commuting options: taking a Boda-Boda, taking a “taxi,” or walking. Boda-Bodas are a “no-no” based on everybody’s opinion; Boda drivers are constantly speeding and meandering in traffic to make profit and I also understand the danger of riding a motorcycle without a helmet, which is common for passengers here. Taxis, minibuses converted from cargo vehicles, are definitely my least favorite type of transportation in Kampala as my limited experience using them is horrifying. During my site visits for a drowning project, I traveled with a colleague to fishing sites near Lake Victoria on a Taxi. Barely any signs say where each of these taxis would be going and the conductor shouts out the destination in Luganda to attract passengers. Having learnt only a few functional phrases in Luganda such as “Masawu sebu (I have arrived at my destination, sir),” I was still not confident to take it myself as I knew too little about the streets. I remember getting off a taxi and being stopped by the conductor for some extra fare. My colleague, having seen my confusion because we have paid, came back and negotiated with the conductor. I later found out that people who look different (whites and Asians) are often asked to pay an extra fee as they are perceived to be very rich by the locals. Refusing to give in, I decided to walk. Little did I know that this would be a full-hour trek up and down the hills, and covering the distance twice a day, I would have walked over 12,000 steps. But only in these morning and afternoon walks was I able to see scenes of the real Ugandan life: I would walk with pupils rushing to school and cross the street with them. I would see women carry goods and water on their heads. I would also see traffic moving slowly through the city and sometimes even accidents.

I spent over two weeks on an injury data project where I had to extract data from the national health database, which is in many ways so different from everything I know. The Health Ministry was very generous and helpful to send an expert to guide me through the system. Even so, my team and I had a difficult time analyzing the data because of the complicated and sometimes bewildering categorization. Yet, the Ministry is constantly adjusting and improving the database by adding new categories to the database. Similar to what I experienced with the health data system, other health challenges are being improved, though often very slowly. The fishermen and fishery officials shared with me what they thought would be most helpful for preventing drowning on Lake Victoria—simply provide more lifejackets and create the culture for wearing them. To make the solution happen, however, is not as easy. Uganda as a country relies heavily on imported goods, and the lifejackets distributed through our research are imported from China and most definitely insufficient for every boat on Lake Victoria. In my opinion, this is a good illustration of trying to solve health problems in Uganda: there are so many steps from identifying a problem, searching for a solution, crossing the social, cultural, and even political barriers, to finally implementing a solution. In between these steps, a lot of things would require more effort to be veered towards a desired direction.

Passengers being carried from the boats (bottom right) at Gaba beach by Lake Victoria because there are no piers: 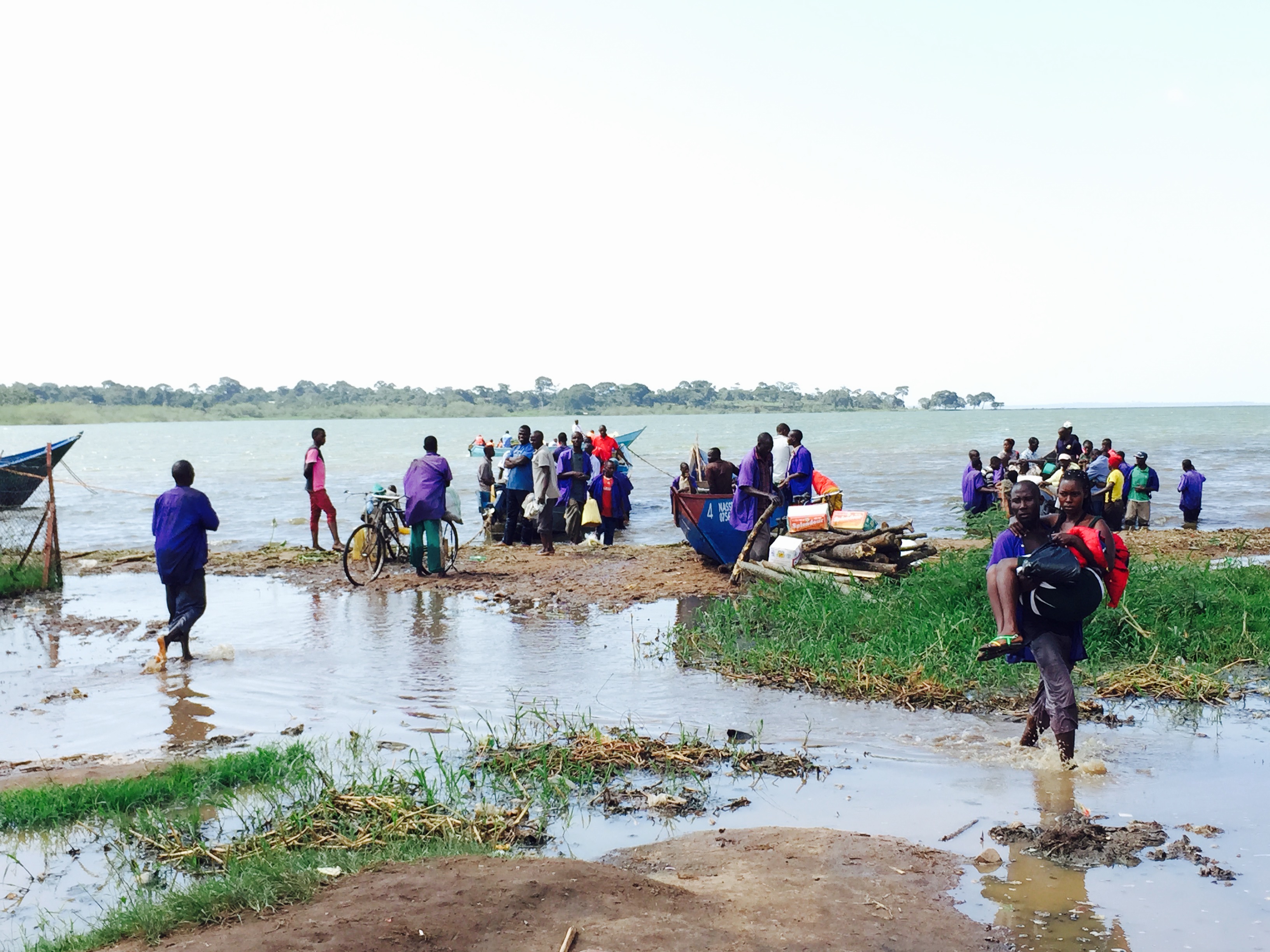 Morning traffic going to central Kampala at 6:50 AM: 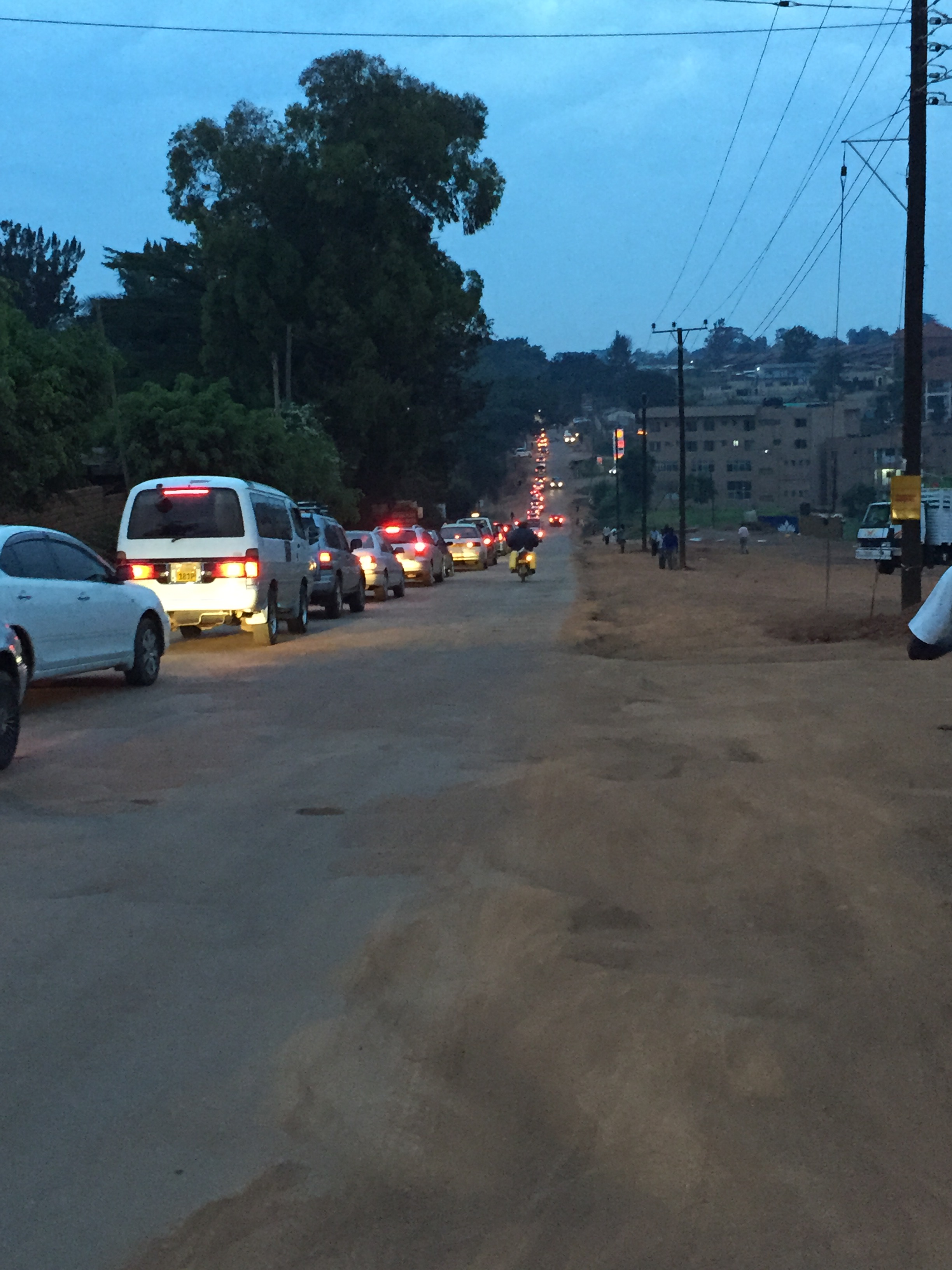 Traffic policemen at an accident scene early in the morning: 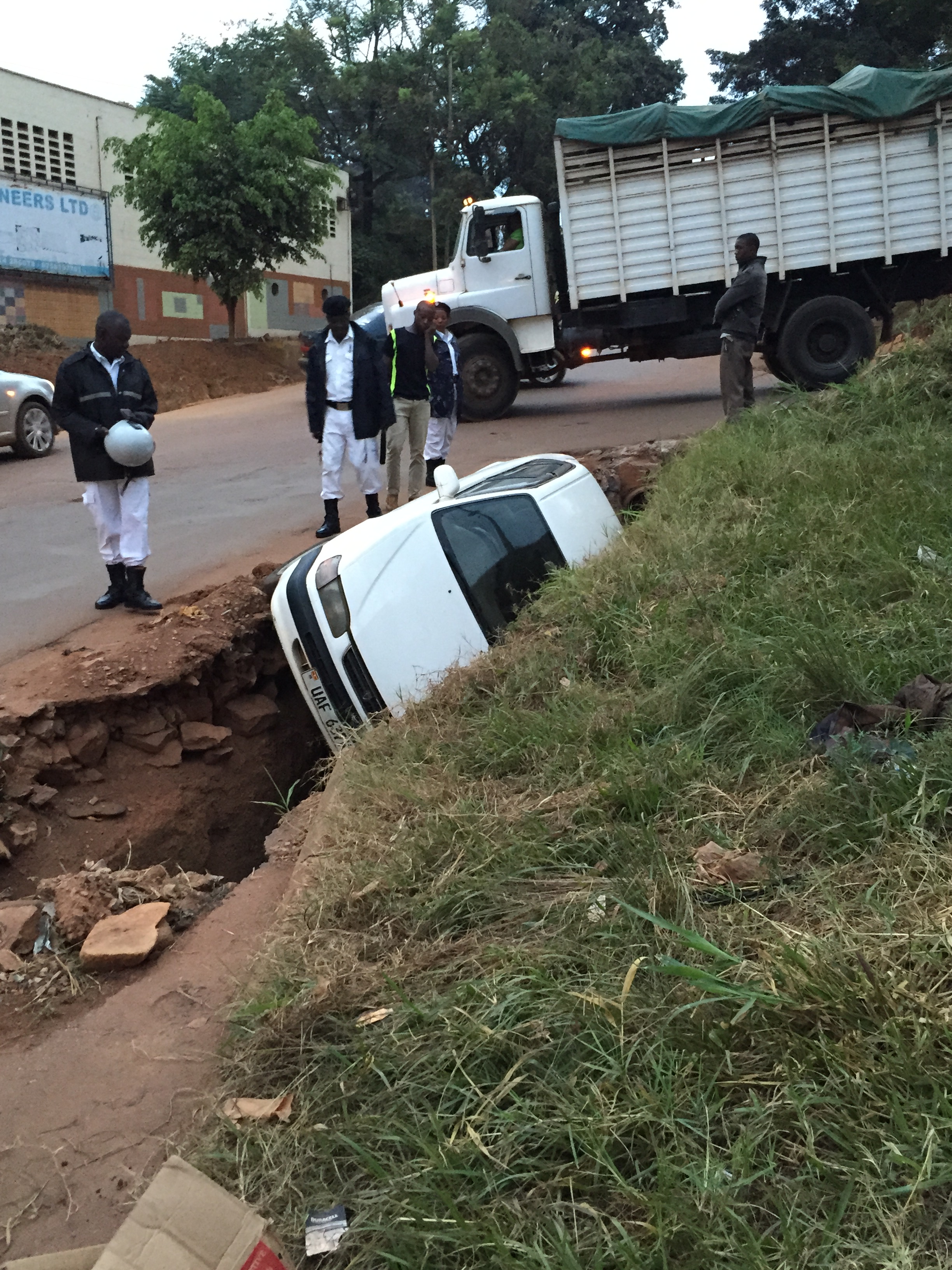 My route to the office passes several schools and pupils (in uniforms) are getting to school around 7 AM: 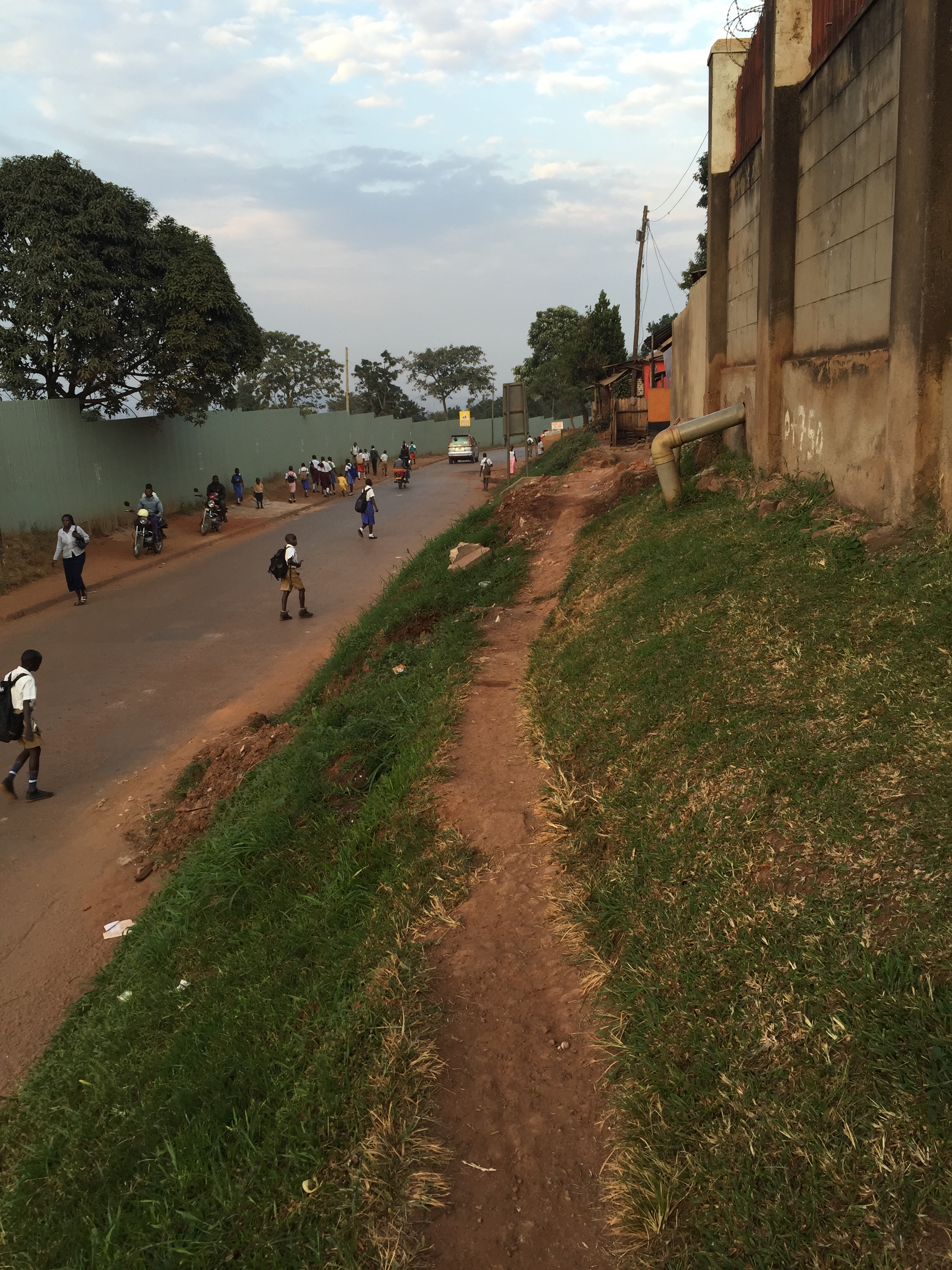 Chronic TRIAD team putting up a banner in Luganda promoting lifejacket use: 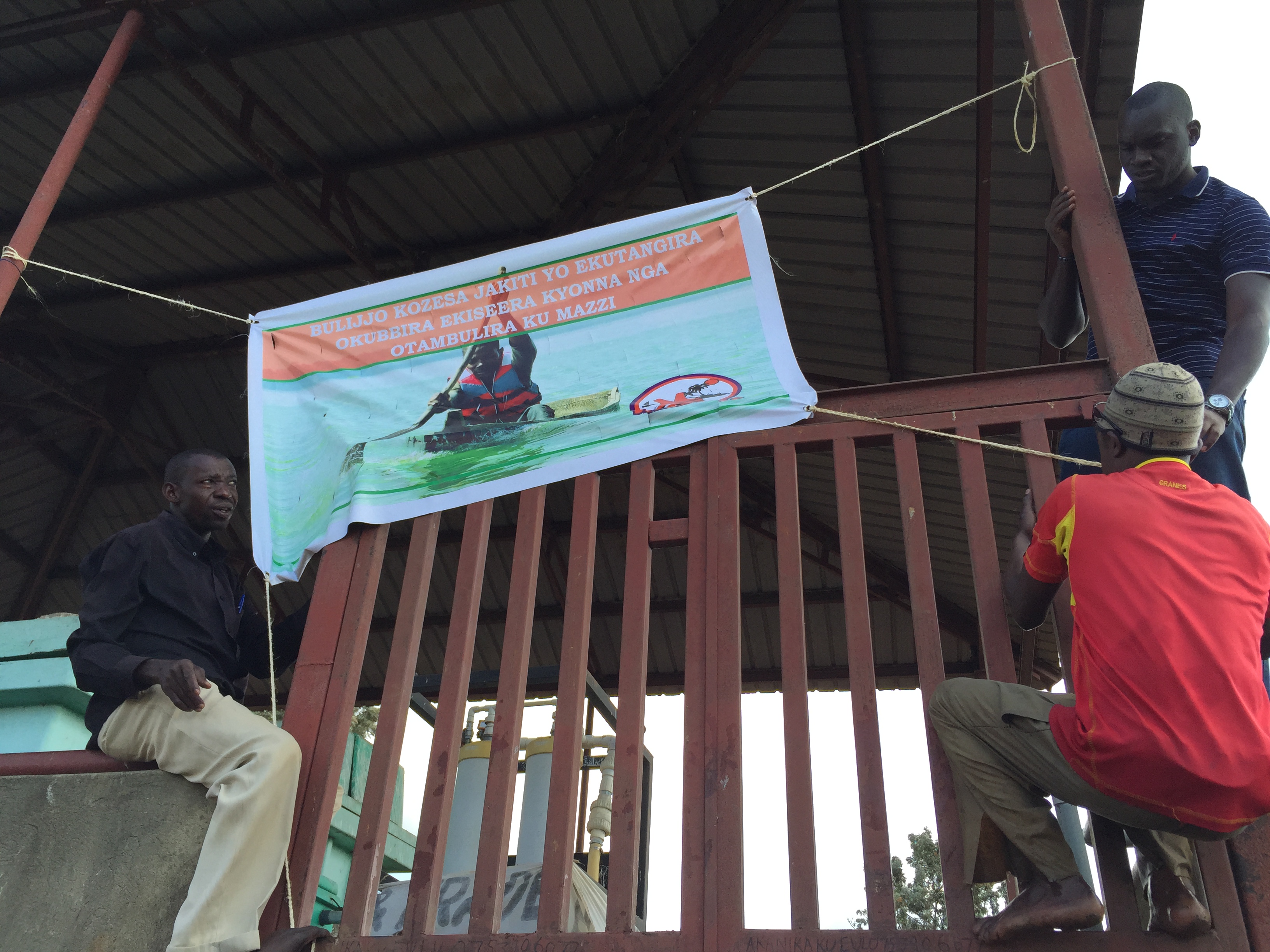