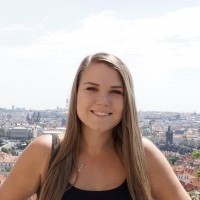 The TEKO study, named for the word "test" in the South African Sesotho language, is a cluster randomized trial in 14 HIV clinics in South Africa comparing time to determine latent TB infection (LTBI) status in patients in clinics using QuantiFERON Gold In-Tube (QGIT) and the tuberculin skin test (TST) versus those with TST only. We linked QGIT with CD4 blood collection and provided an operational comparison between QGIT and TST in HIV-infected patients in a country that accounts for one-third of the HIV-related TB in the world. While patient enrollment and follow up has been completed, the TEKO study data analysis is currently ongoing. Careful evaluation of the implementation and operational aspects of the program will provide useful knowledge for future scale-up in this and other HIV clinic settings.

The TEKO database is currently being used to answer many questions regarding HIV and TB. Ongoing analyses aim to understand QGIT performance and implementation in HIV-infected individuals, as well as determining what current LTBI diagnostic procedures are being used in the local clinics. Additional data is required from the National Health Laboratory Service (NHLS) and the local Tier.net databases. The NHLS is a national database of laboratory results, including those from HIV tests and CD4 / viral load blood collections. Tier.net databases are housed in individual clinics, with monthly reports being provided to the province. These additional data will enhance the power of the TEKO database and answer new emerging questions.

Through the GHEFP program, I spent my summer in South Africa working on a study revolving around HIV and tuberculosis (TB) coinfections. I was very excited to be part of this study given my interest in infectious diseases and the significant HIV/TB coinfection burden that South Africa carries. I arrived in South Africa with a mixed sense of excitement and apprehension. I had never ventured this far from home and was naturally a bit nervous to properly adapt to a new culture and way of life. I spent 6 weeks working in a hospital setting in a rural town and my remaining 3 weeks working in an office building belonging to a research unit in Johannesburg. I truly enjoyed getting to experience both the wildlife-filled and simplistic rural life as well as the vibrant and market-filled city life in South Africa. Being immersed in the rich South African culture was an incredible and eye-opening experience. Each region of the country was so diverse in language, ethnicity, culture, and even climate. I was fortunate to frequently travel on the weekends and explore new corners of the country. From hiking in the Drakensburg mountains and discovering bushman paintings to snorkeling with seals in Cape Town and walking the beach in Durban, each excursion really gave me a fuller image of South Africa.

One of the most shocking and perhaps more unsettling things to see was the stark difference between living situations of the rich and poor. While this, unfortunately, is evident in many countries, including in the United States, the history of Apartheid and the role race played in these differences was baffling. It was strange going to work in a township outside of Johannesburg with people bustling about outside and houses built of scraps, to go to the more affluent areas where homes and neighbors couldn’t even be seen behind the 12-foot walls, barbed wire, gates, and intense security system. Crime is a major issue in South Africa and I had many conversations with locals about it. Constantly, I was drawn in discussions that brought to light the different as well as similar issues plaguing South Africa and the US.

What generally made my time in South Africa so amazing was meeting so many different people and having these invigorating conversations. The one thing I recommend to other students seeking a similar experience is to really get to know the people you are surrounded by. I am so thankful for the excursions, meals, and braais I shared with my neighbors, doctors, administrative staff, South African medical students, and other locals. I learned so much about life in South Africa from them – from the ever-prominent remnants of Apartheid, South African politics, how their health system works and its advantages and disadvantages, and how they view events occurring and systems implemented elsewhere in the world. I was able to better understand the people of South Africa and why things are the way they are and even evaluate the American health system in a new light. One subject that was often discussed is how doctors in the United States tend to be extremely niche and specialized whereas in the hospital that I worked, and the ward rounds I observed between conducting my research, the doctors have more all-encompassing roles. One of the more interesting parts of the ward rounds for me as a public health student was observing the way doctors told newly diagnosed HIV patients of their diagnoses, asked for their partners to come in and get tested, and frequently faced denial and dismissal of HIV diagnoses from patients. While the stigma surrounding HIV is a well-known issue, it brought new meaning to me to see the fear in people’s eyes as they were told of their positive status and witness their often vociferous denial of illness and resistance to accept treatment. For me, this experience put a human face to the many challenges that still prevail in our endeavors to improve the health of people and populations. Overall, this experience pushed me beyond my comfort zone in ways that helped me grow as an individual and a public health researcher while constantly affirming my decision to pursue a career fighting for the well-being of others. 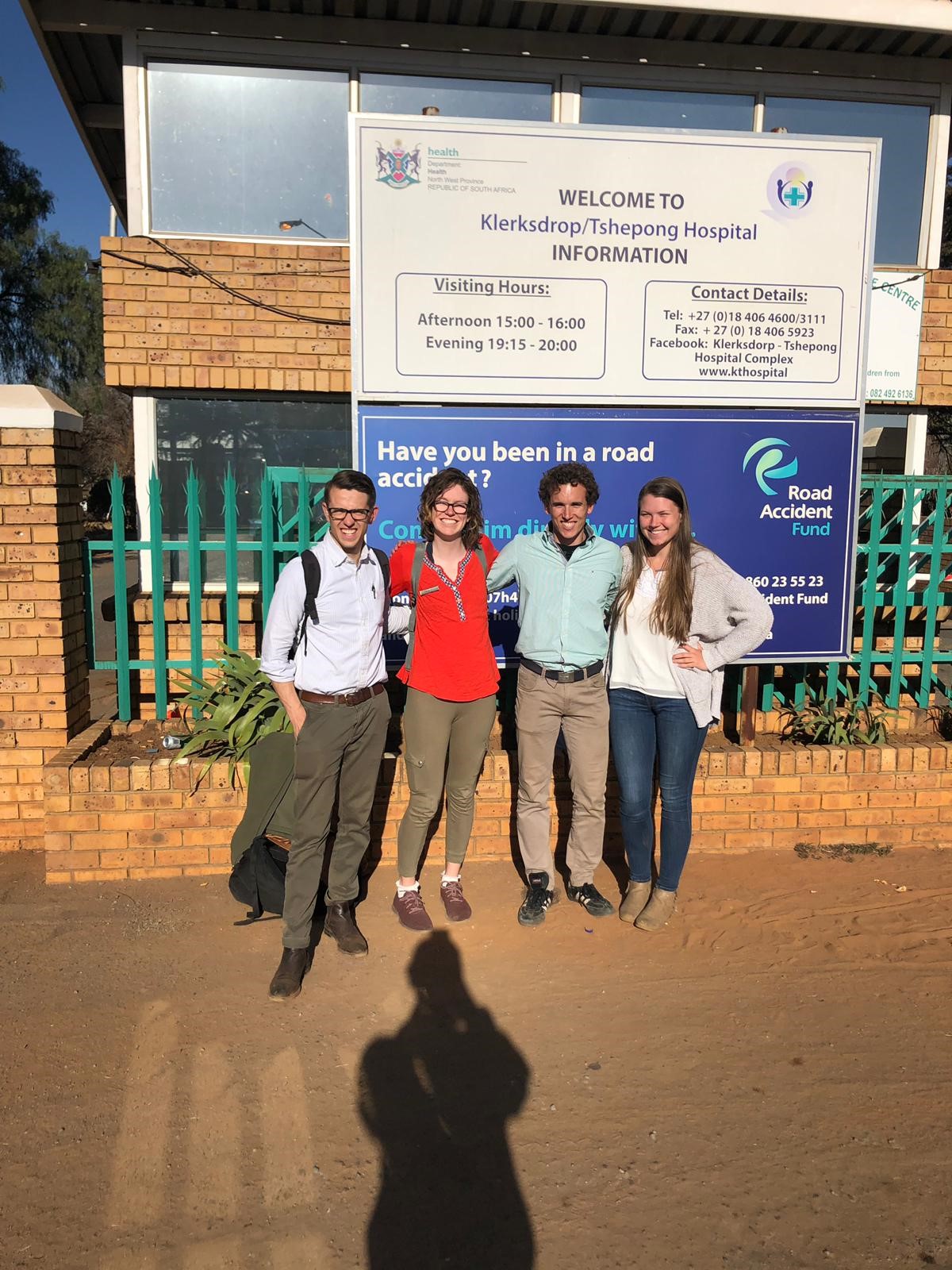 Fellow Hopkins students and I outside of the hospital we were conducting research at in Klerksdorp, South Africa 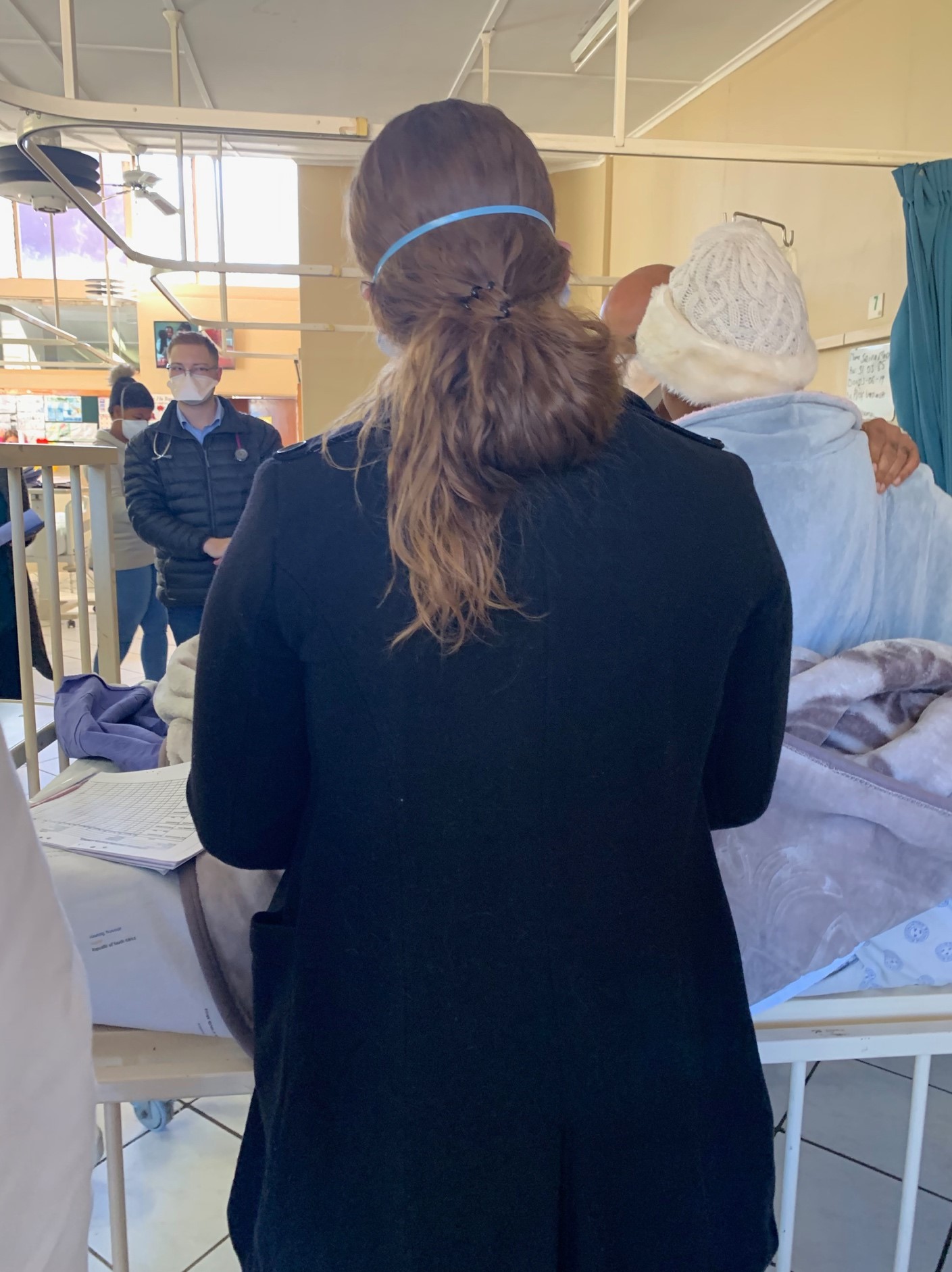 A snapshot of ward rounds in the hospital where a doctor is checking in on a patient with medical students surrounding. The picture shows the TB masks we wore at all times in the TB wards 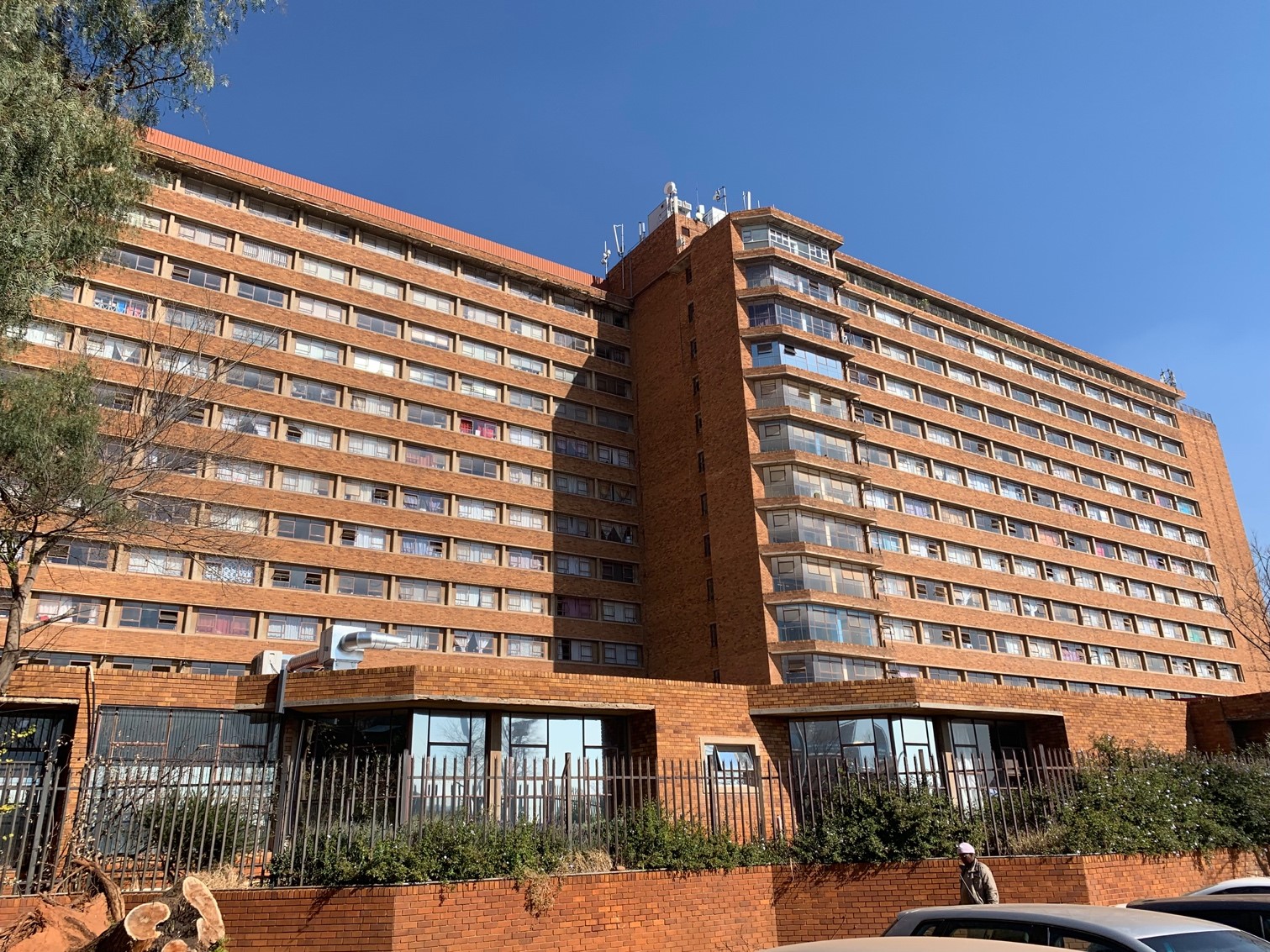 The PHRU (Perinatal HIV Research Unit) office in the township of Soweto in Johannesburg in which I conducted research. It is part of the Chris Hani Baragwanath Hospital which is the largest hospital in Africa. 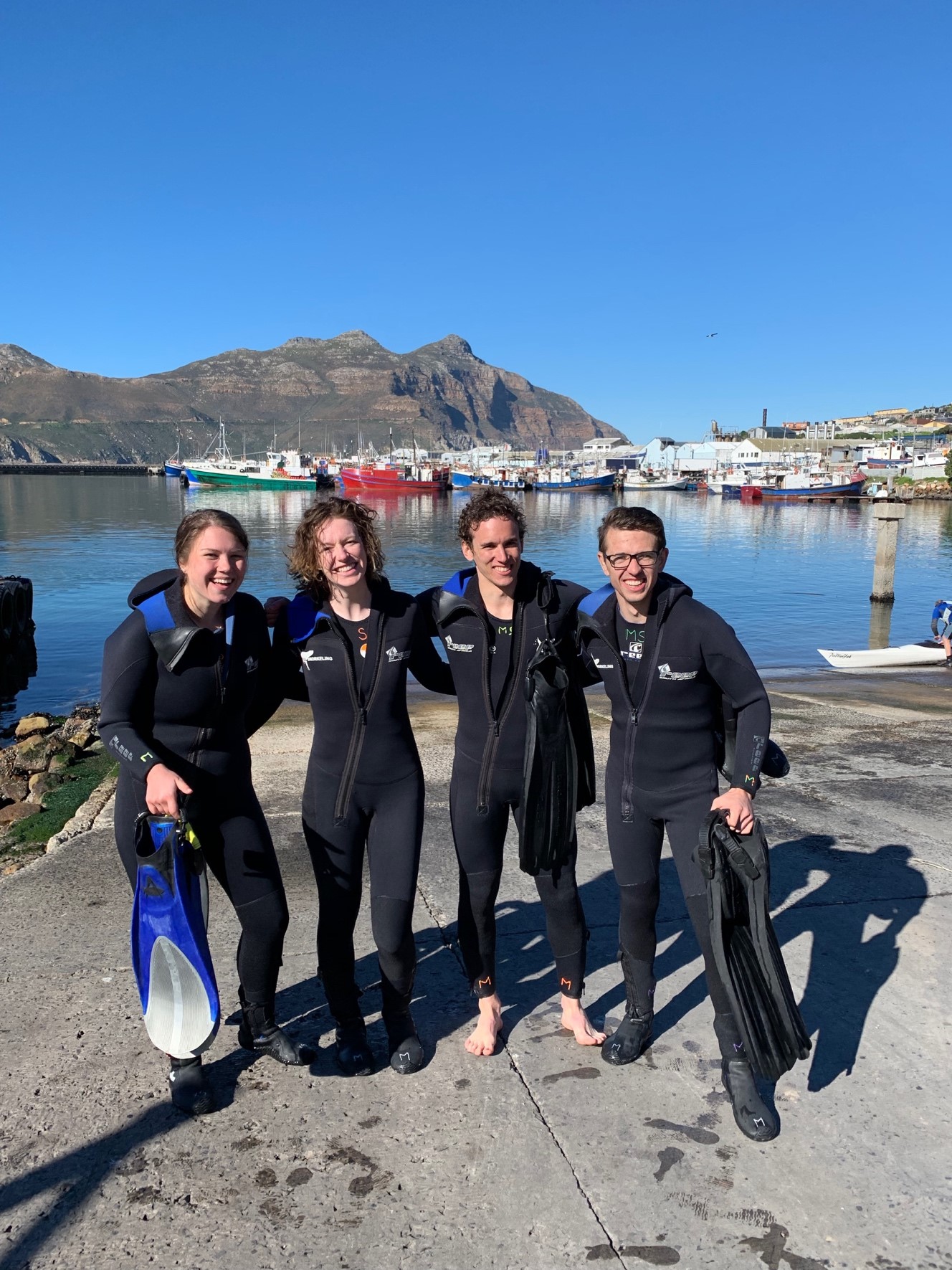 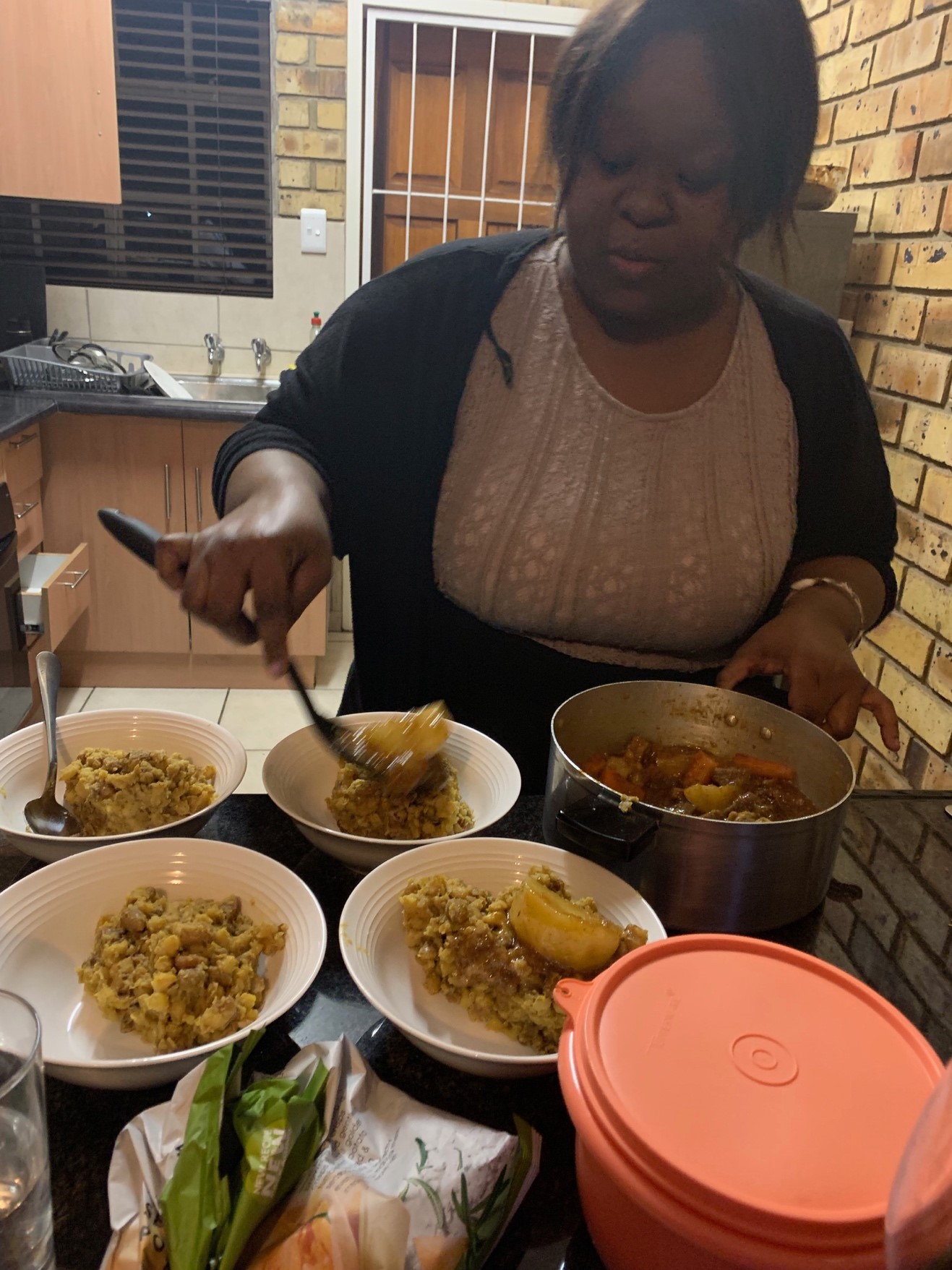 Enjoying a home-cooked dinner with a neighbor and friend. She prepared a traditional South African meal of homecooked pap and beef stew.