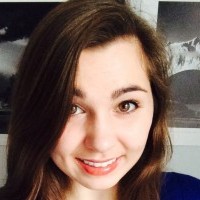 MINE TB: Active TB Case Finding in Mine Labour-Sending Regions

South Africa is burdened by the highest prevalence of HIV/AIDS in the world (5.6M people living with HIV) as well as one of the worst tuberculosis (TB) epidemics in the world. Among occupational groups, the South African gold mining industry has the highest incidence of TB in the world, with estimated cases ranging from 3,000 to 7,000 per 100,000 miners per year (10 times the level considered a "TB emergency" by WHO). Working and living conditions, such as exposure to silica dust and poor ventilation in the mines, increase risk of disease, and regular migration among miners makes case detection and treatment adherence a challenge.

IRD SA and The Aurum Institute are collaborating with South Africa’s National, Provincial and District Departments of Health to increase tuberculosis (TB) and HIV case detection and treatment initiation in select districts in KwaZulu Natal chosen for their high rates of mine labor-sending. The project has been made possible by a generous donation from the TB REACH Secretariat, which is a WHO Stop TB Partnership initiative dedicated to promoting early and increased TB case-detection using innovative approaches among poor, underserved, and vulnerable populations. More information about TB REACH can be found here: http://www.stoptb.org/global/awards/tbreach/

There are 2 major components of MINE-TB:

2. Innovative Approaches in Community-based Screening.
To increase access to care among hard-to-reach populations, the program is deploying community-based screeners linked to mobile teams of screening agents to increase quality TB and HIV screening, testing, and treatment in rural communities using a Social Franchising model. Sputum is collected from all those with presumptive TB who are able to expectorate at the time of screening, and is transported by the project to local government Clinics and Hospitals within 24 hours of expectoration. Clients with presumptive and diagnosed TB will be referred for HIV counselling and testing.

Additionally, the project will use incentives for screeners in the community beyond a basic stipend in the form of conditional cash transfers for specific tasks performed and results achieved, including identification of an unreported bacteriologically positive cases and treatment initiation.

IRD has offices in Dubai, Karachi, Singapore, and Johannesburg. This posting is for the South Africa field sub-office.

My experience in my Global Health Established Field Placement vastly exceeded my expectations for what working abroad would be like. Thanks to my mentor, I felt immediately comfortable while in country, and I found my coworkers and every local I met to be exceptionally welcoming and generous. Integrating into South African culture was smooth and easy for me, once my colleagues taught me to engage in personal conversation before conducting business. I discovered the importance that family carries in South African culture, and that chatting about children and home life while at the office was not only accepted but also highly encouraged. The environment in the office was such that I grew to understand my colleagues on a much deeper level than I would expect as a transient intern, and I felt as though they had become my own small family during my time abroad.

Integration into the project itself was just as swift as my interpersonal entrance. From the first week, I was tasked to produce tables and charts for various authorities, including district and provincial health departments. With the guidance of my fellow interns, all of whom were master’s students, I learned the nuances of Excel color-coding, along with a bit of actual coding. I also began working immediately on what was to be my personal objective for the duration of my stay: cleaning out the project’s database. Having no experience in database management and only remedial Excel skills, my first week was admittedly frustrating. However, as I grew more comfortable in the interface, I became completely enthralled. I found myself working extra hours at home refining my charts and notes, and by my last week I was teaching the team’s data capturers how to continue my work through the schematic I had designed. It took until that final week to realize that I had not only expanded my own skills, but that I had also made a practical contribution to the project that would remain well after I had left.

I had hoped upon embarking on my project that I would learn not only technical skills, but also more abstract ideas about what the field of public health translates to in the working world. Though I understood the concepts, I was unsure what my prospects for employment might encompass after graduation. While in South Africa, this viewpoint came into much sharper focus. Thanks to a very well traveled mentor, I was introduced to organizations and jobs that I previously had not known existed. I began toying with ideas of training with my PI’s NGO in Pakistan or joining USAID. I realized that the experience of working abroad does not simply open ones eyes to that country alone, but to the sheer size and scope of the world beyond what we have thus far experienced. I was shocked at how small it made me feel, and yet I found it extremely empowering that there is so much left to do in the world of which I can be a part.

I was also reminded of the fact that even though I am entirely new to the realm of public health fieldwork, I was still able to have a measurable impact on current issues, not just those in my far distant future. While I certainly felt helpful during the long nights spent in the office crunching numbers to finish the quarterly report, I found that my tangible contributions were the most rewarding. After learning to set up our field health screeners’ android phones, I programmed several dozen of them for the project. I was then able to instruct several members of the Kwa-Zulu Natal provincial Department of Health how to use them to access our screening application, which was an exciting experience for me as well as a major breakthrough for the program as a whole. The most fulfilling experience, though, was being able to work directly with our screeners, and to see the connection between what I was doing in the office and what was being actualized within the communities in which we worked. Giving prizes to our best screeners and engaging with them in half-English half-Zulu brainstorming meetings allowed me to see the scope of dedication required at every level to make programs like these work, and I was so inspired by those who were striving both to advance universally applicable healthcare initiatives and to provide aid within their own communities. 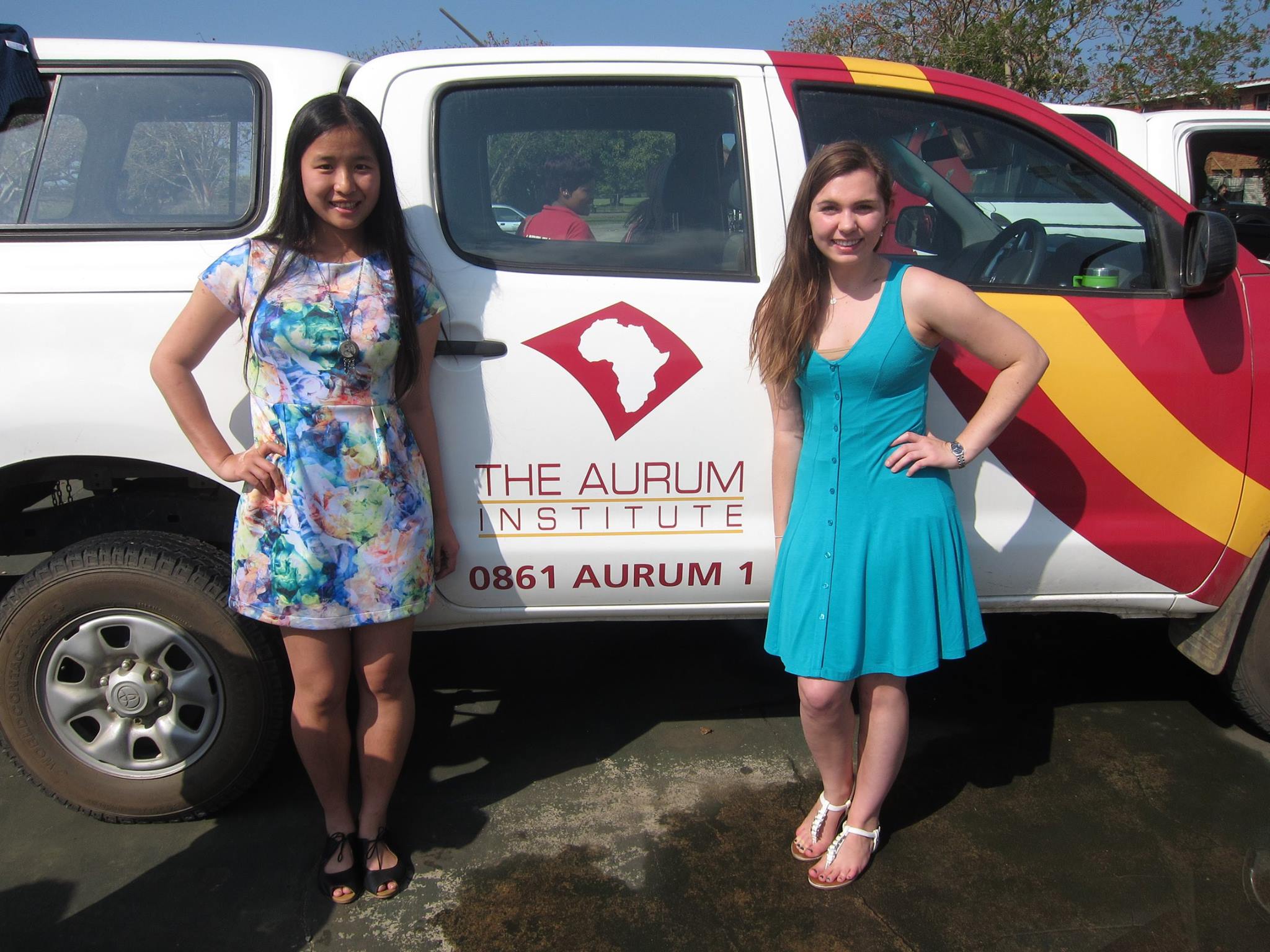 In this photo, I am standing next to my fellow Johns Hopkins intern, Shulin, in front of the project's "bakkie" (the South African term for truck). 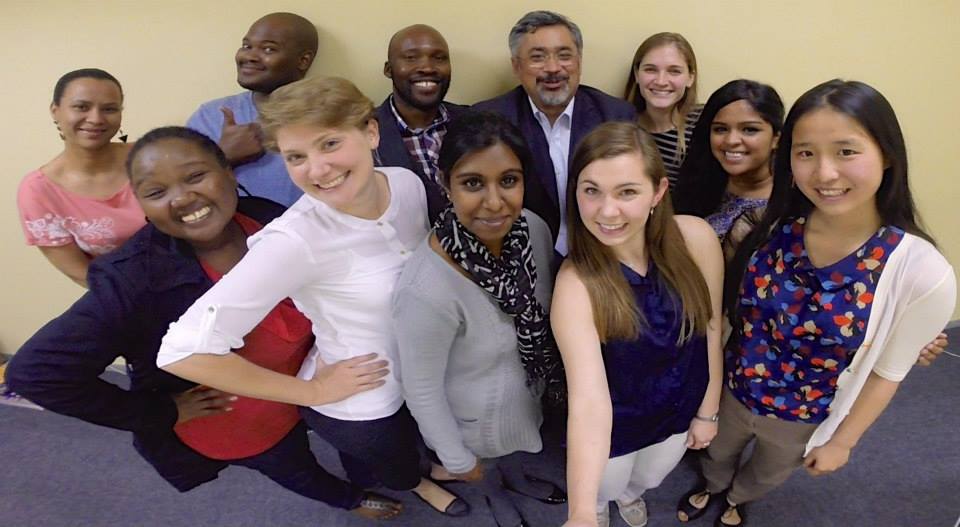 This photo is my favorite from my experience. Here, the CEO of our organization was visiting South Africa, and he insisted that everyone on the team take a selfie. I, as the youngest, was made to hold the selfie stick. 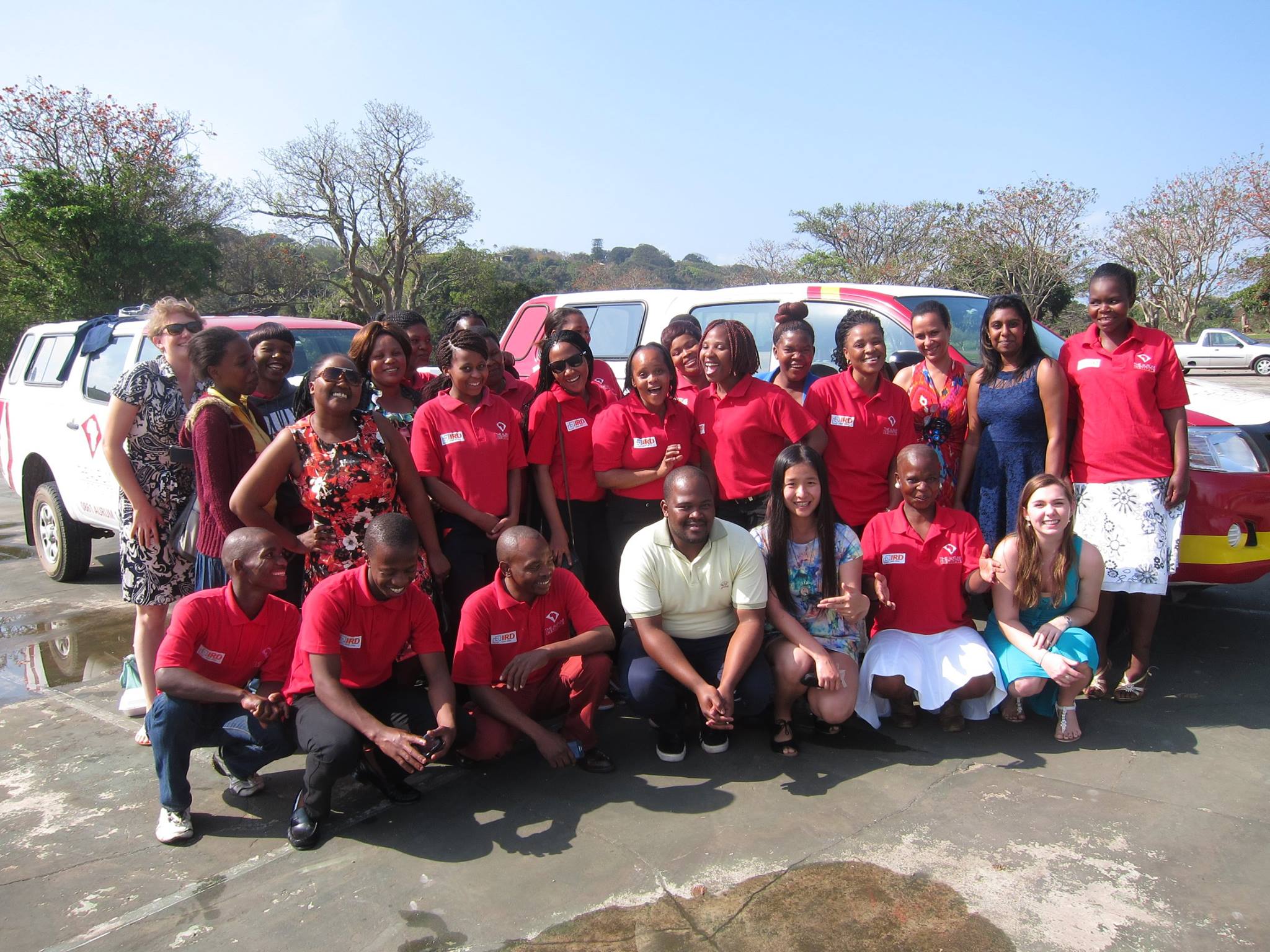 Here, I am with the project's team of health screeners for Ugu District after a progress meeting to unveil a new video to be used during screening. The attitude of the team is captured particularely well in this shot. 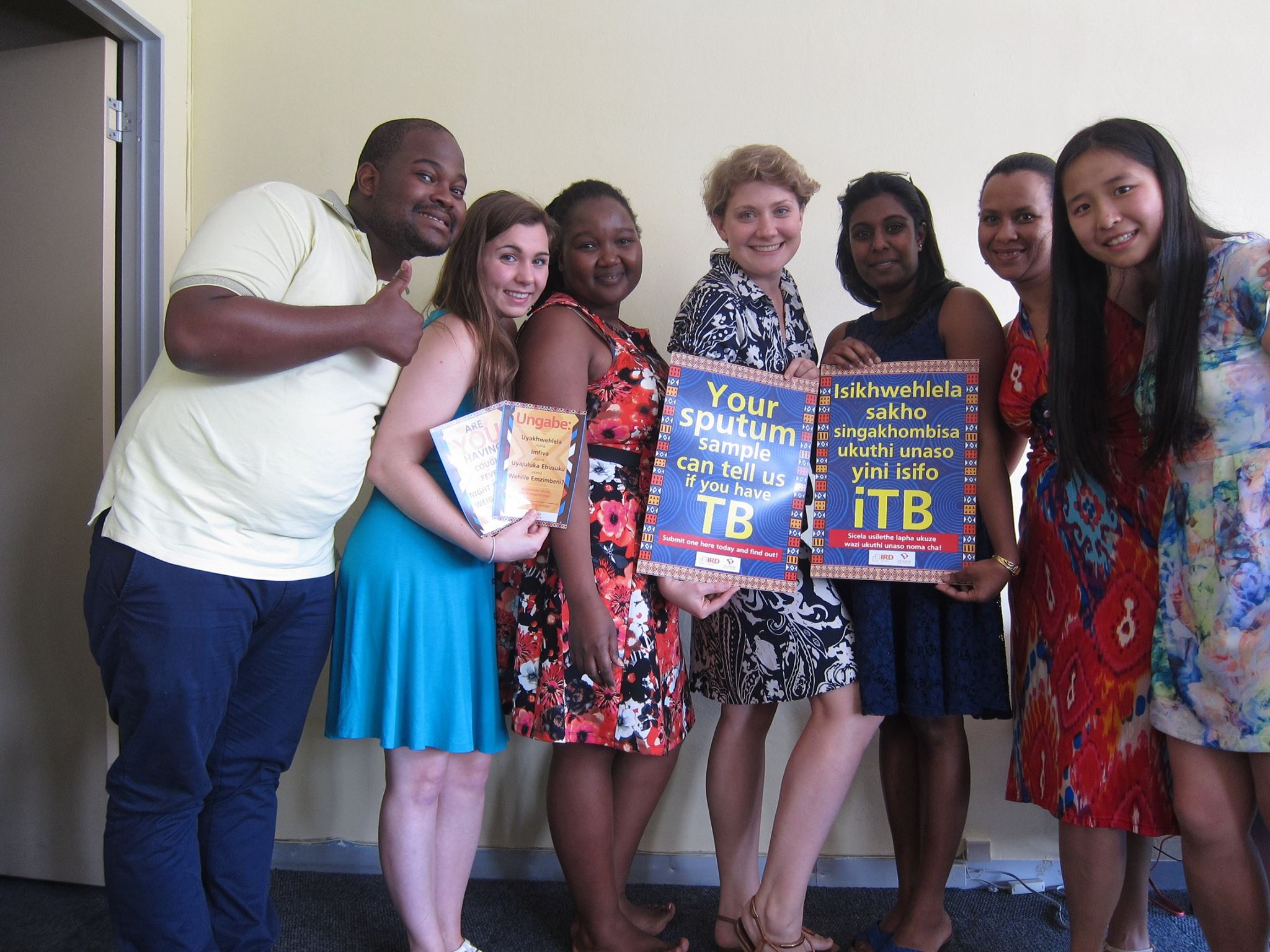 This photo was taken on my fellow intern Shulin's last day. Here, the Ugu District team and I are sporting the tuberculosis screening posters we designed, in both English and Zulu. 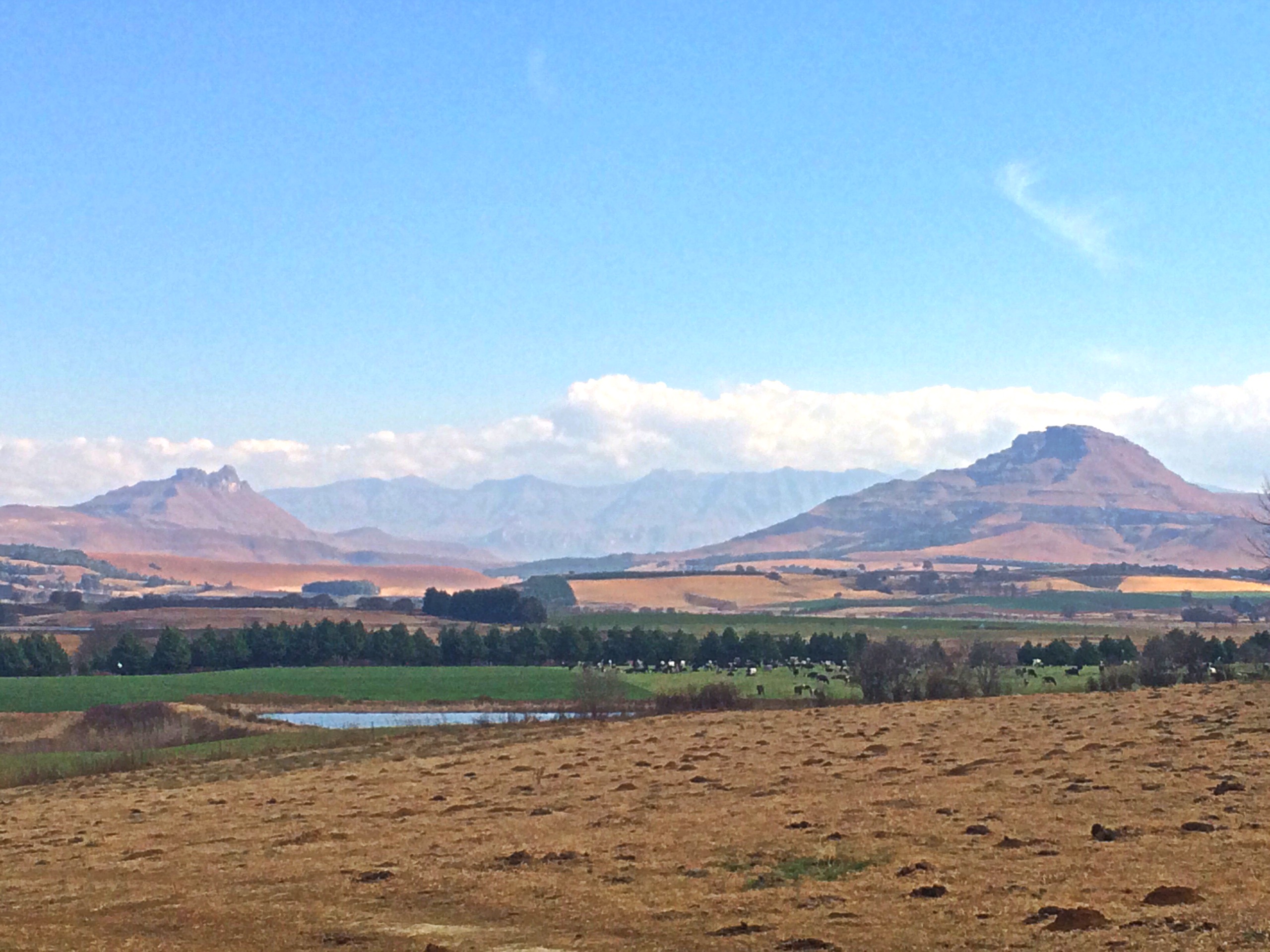 This photo depicts my view on the way to one of our more rural clinics. This view of the mountains is one of many examples of the beautiful landscape I saw almost every day in South Africa.