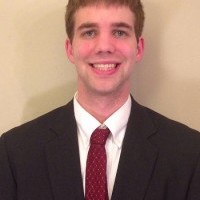 Having never been to India prior to this experience, I was a little uncertain what to anticipate in the wards or the lab. I arrived from the airport slightly jet-lagged but excited to see what was ahead of me for the next month. I arrived at the hospital and upon entering was greeted by two gurneys with white sheets pulled completely over the bodies beneath passing in the opposite direction. This represented a slight culture shock as did my first stop in the open air wards containing around 100 patients each kept together in long corridors. The healthcare environment that I had only heard about in the developing world stood in stark contrast to what I had grown accustomed to during my training at Johns Hopkins and I initially had self-doubt about my ability to adapt to this setting. However the following day I arrived back at the hospital, both excited and nervous, to begin my clinical work in earnest. Over the next several weeks, my early reservations became replaced by admiration for the residents, attendings, and patients who managed stoically with such limited resources. I marveled at the impressive physical findings displayed by patients with severe mitral stenosis, tubercular meningitis, and leprosy while realizing at the same time these findings were a sad marker of a system which did not have the resources to detect and intervene on these disease processes earlier in their course.

The lack of objective diagnostic testing (labs and radiography) forces clinicians at Sassoon to make empiric treatment choices based on the best available information garnered from the patient history and findings on physical examination. This helped to reinforce the principle that most diagnoses are derived through taking a good history but also illustrated in other instances the additive and supportive role that other modalities afford us in the United States.

The most uncomfortable aspect of my trip involved the delivery of medical updates to patients and their family members, which were conveyed in a rather paternalistic way in stark contrast to the more open approach that is customary in the US. The most striking instance of this difference involved a MICU patient found to be pulseless. We were rounding on a different patient when an individual with bacterial meningitis’ family rushed over to inform us that their loved one was no longer responsive. We came over to assess the patient and realized that they were indeed pulseless. As the patient was not on a cardiac monitor due to lack of availability, we did not know how long this had been the case but CPR was initiated and the patient’s family was asked to proceed to the waiting room. An endotracheal tube was placed and CPR continued for a minute or two. A pulse check was performed again, with none palpable and everyone started to walk away. I spoke with one of the junior residents with whom I had become friends and inquired why everyone had stopped, suggesting that EKG to evaluate for a shockable rhythm or continuing CPR might be valuable. The resident smiled and responded that while these were good suggestions under some circumstances, we had no way to ascertain how long this woman had been pulseless and due to her underlying disease and age, she was unlikely to achieve meaningful recovery. While I was not in a position to argue with the validity of these statements, I still was uncomfortable with this plan of action. I discussed these thoughts with the supervising attending who echoed the resident’s assessment of the current situation. I was disturbed by this and brought up that if we were pursuing no further attempts at resuscitation then we were not providing the patient any benefit with mechanical ventilation. They agreed with this statement, but mentioned that the family needed time to process their loved one’s passing. They intended to let the family know that the patient was not doing well followed a gradual series of pessimistic updates before informing them she had passed in several hours. I was taken aback by this approach as it was not the way that I had been trained to deliver bad news. I reflected on whether I should have administered CPR myself, but believed (and still do) that it was not my place to intervene into the way they delivered care. In the US, resuscitation would have been performed while the family was consulted for possible transition to DNR.  I simply articulated the way we would have handled this situation at our institution as a feeble attempt to further express my opinion before accepting the situation as a part of local medical practice.

At first I felt overwhelmed by the healthcare situation in Sassoon, and the approach taken with patients. However upon reflecting further on this experience I realize that most of the differences are due to availability of resources and cultural differences.  I learned a great deal, both about the challenges of healthcare in the developing world and myself.  The importance of family in the Indian healthcare system cannot be overstated as a patient’s family keeps a record of all of their medical history including radiographic films and often serve as transporters to various procedures and tests as well as couriers to pick up medications. I feel fortunate to have had the opportunity to experience this healthcare system first hand, and experience many of the principle and practice differences between Sassoon and the United States.

In an effort to enhance these diagnostic options, the research component of my time in Pune consisted of developing qPCR assays for the detection of Dengue and Zika viruses in a cohort of patients presenting to the hospital with acute febrile illnesses. Thankfully, the needed samples had been already collected and appropriately stored, which streamlined my efforts greatly. As in the clinic, the laboratory space was substantially different from what I was accustomed to in the United States. However, the colleagues that I worked with were extremely warm and helpful in assisting me to locate the work area and the necessary supplies. Unfortunately, some of the work was hampered by the logistics of obtaining the missing reagents needed for the work. Due to complications in the bureaucratic systems in India, our original order became stuck in customs. Despite repeated calls in the months prior to and during my stay, we never managed to clear this hurdle. While this was frustrating, I was grateful for the collaborative nature of the laboratories in Pune and we were able to complete a good proportion of our work through reagents borrowed from other laboratories, including the initial RNA extractions from the serum samples and creation of cDNA. I will have to await the efforts of one of my colleagues, Matt Robinson to learn the results of this work, including if Zika virus is present in Pune and if there is an enhanced sensitivity provided by Dengue PCR as opposed to the currently employed antigen assay. In spite of these challenges, I found this experience to be both productive and rewarding. During my time I was also able to develop protocols for the work I completed and teach others in the laboratory the work I was doing to allow it to be carried on after my departure.

Working in lab with the clinical trial unit staff: 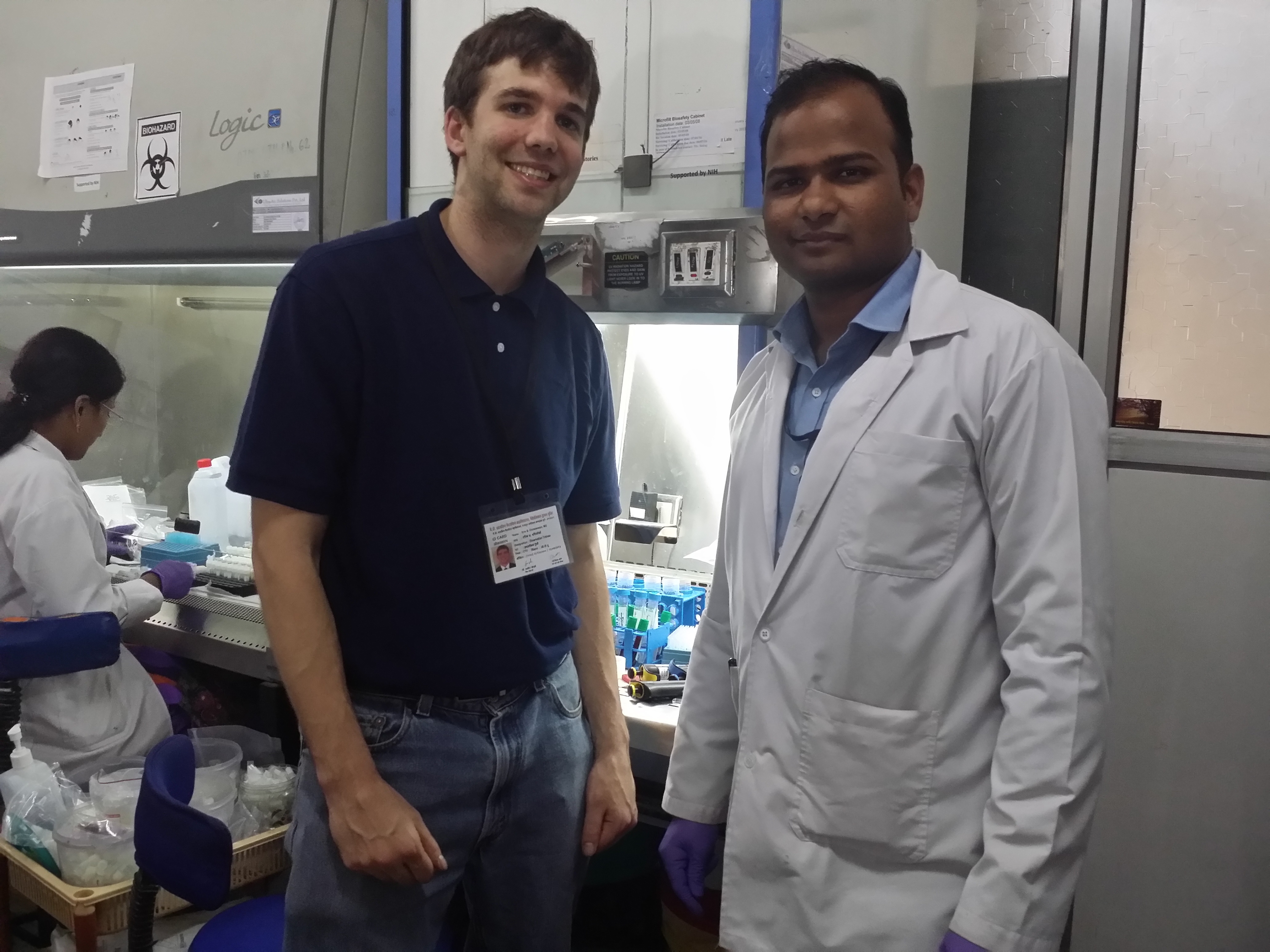 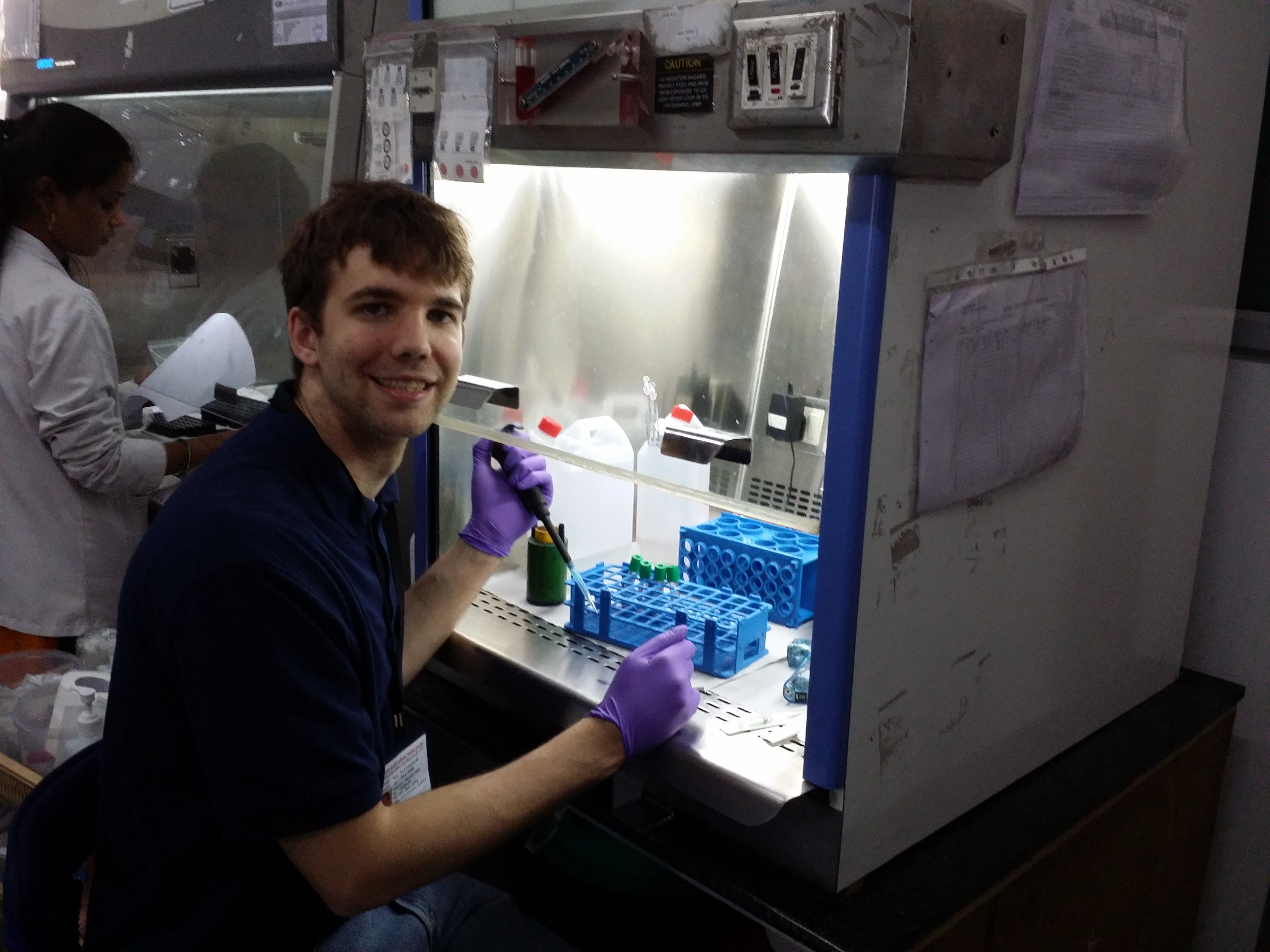 Rounds in the ICU: 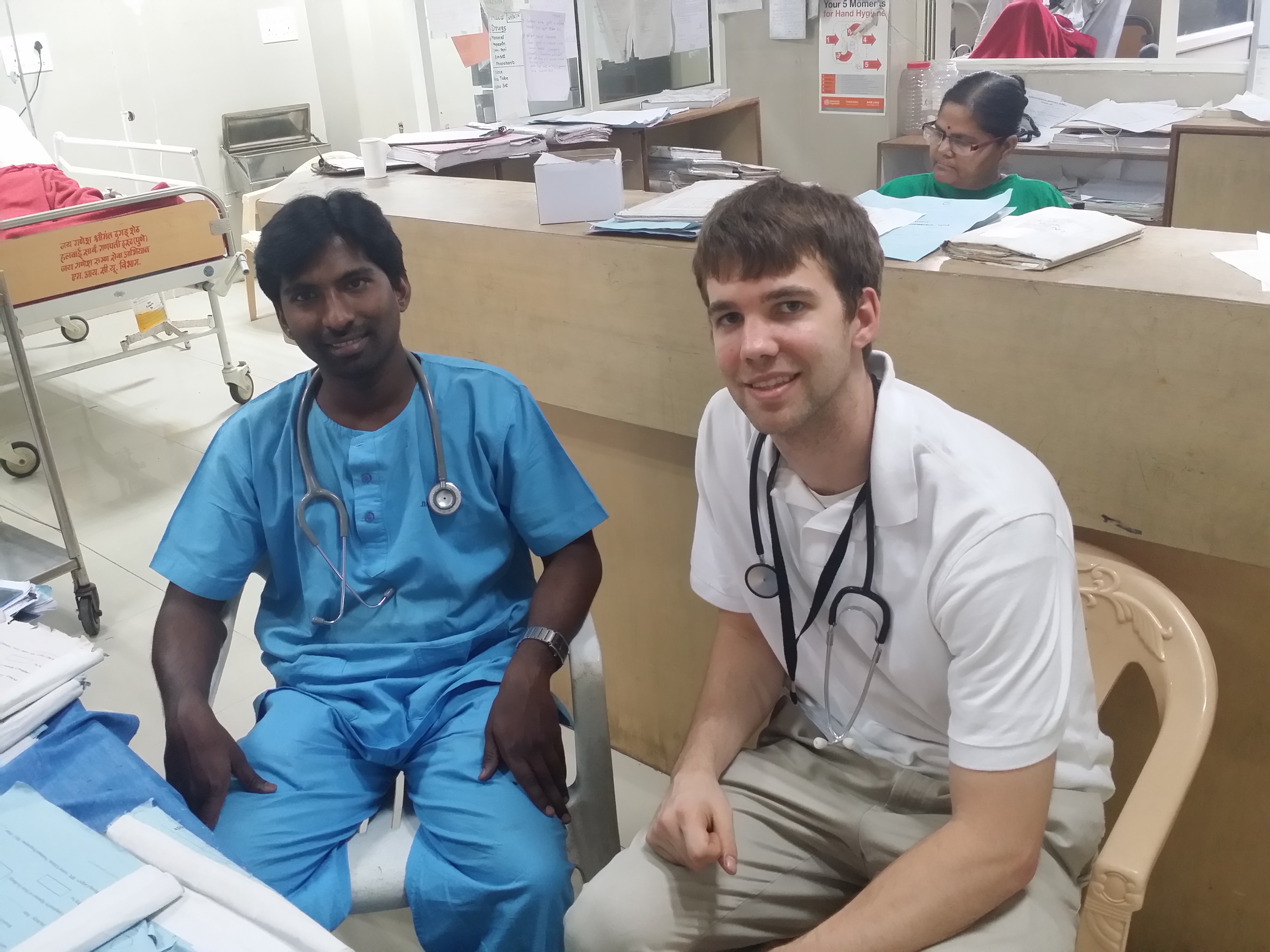 A Typical Morning on the Wards: 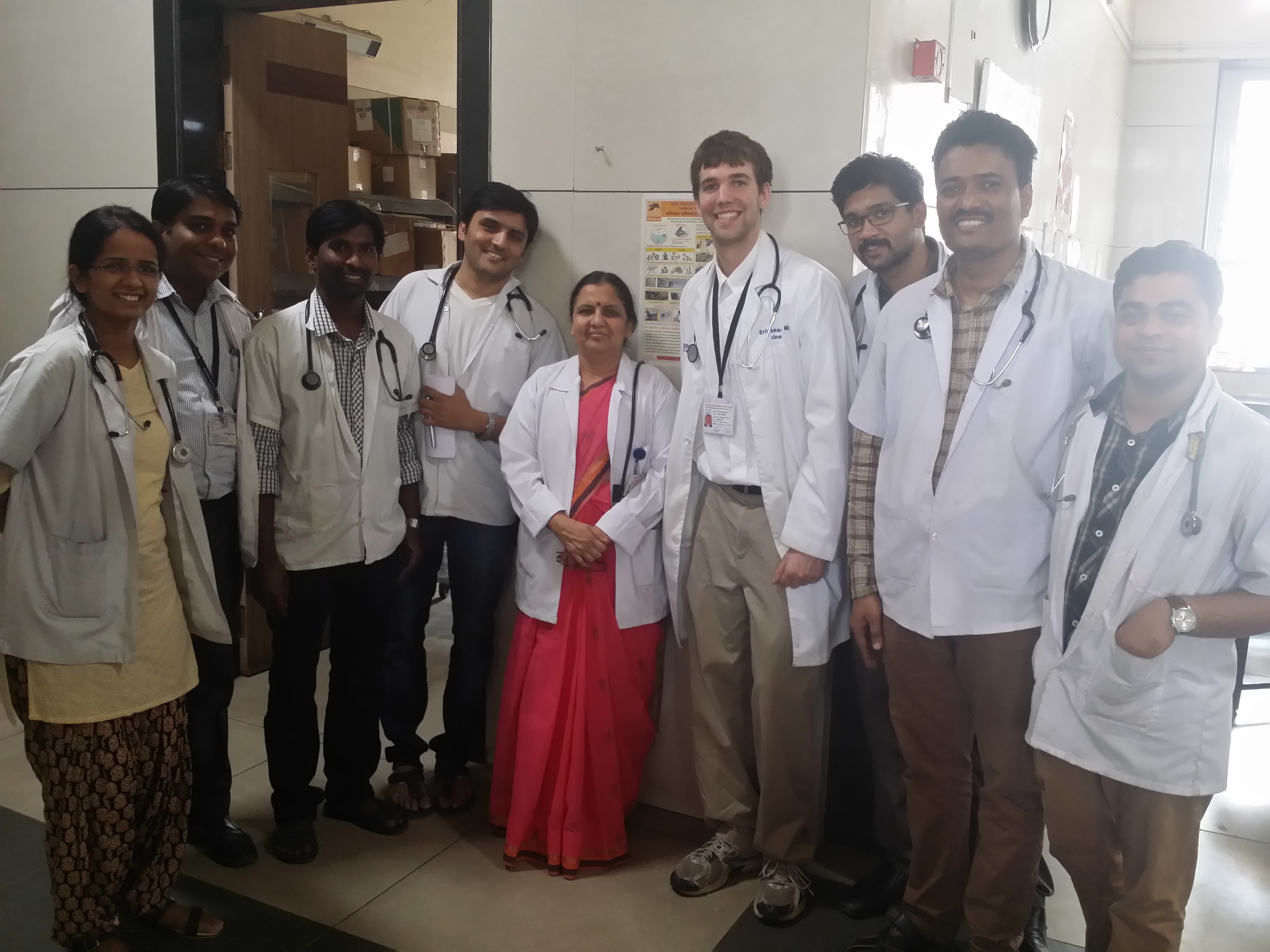