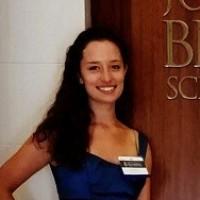 The projects underway include a large cohort study on the interactions of undernutrition, enteric enteropathy and child growth.  This study has been underway for 5 years and has a biobank and database that is being used to evauluate new biomarkers for intestinal dysfunction as it relates to micronutrient stauts and oral vaccine failure and child growth.

I landed in Iquitos in the enveloping cloak of a night so humid that droplets of condensation accumulated and slid slowly down the plane windows within the five minutes we spent taxiing. The humidity I expected, and even the scant clumps of shimmering lights in the carpet of blackness beneath the plane fell in line with my expectations that I was headed towards somewhere remote, untouched. Imagine my surprise, then, as I boarded a mototaxi heading to my new apartment and saw, jostling on the bumpy roads, a slurry of neon signs and people milling about well-lit plazas even late on this Sunday evening. Iquitos was much larger than I anticipated, much more developed, a full-blown city dropped into the middle of the wild jungle.

To be certain, the periurban communities we worked in were farther outside the reach of development. Wireless internet was uncommon, though flat-screens were found in even the most ramshackle of homes. This, perhaps, was one of the discrepancies that was most illuminating: houses without plumbing had rudimentary cable, people in homes without refrigerators plugged in with smart phones. And contrary to some overly-pessimistic portrayals of these lives, many of them are happy. There is no use in painting a broad-stroked picture either of desolation or of jubilation; these are lives that are led by normal people, filled with challenges but also with pinpricks of joy. I distinctly remember sitting in a simple home with a dirt floor, listening to a weary mother of four wearing clothes with frayed patches from heavy scrubbing say that she was never depressed, but only tired. As someone who has struggled with depression, watching that kind of resilience was impactful and drove home the idea that while there are certainly a large number of systemic injustices to be addressed in the lives of marginalized people, there is suffering in every socioeconomic bracket.

To be certain, there were basic human needs that were not being met in the community. My project focused largely on water quality, and simply listening to people describe the distinctly unreliable ways they obtained water highlighted the complicated nature of accessing this basic need. Water sources varied by time of year, by the frequent breaking of the public wells. As recently as a year prior the entire town had a filtration system, installed by an NGO, that piped potable water into homes. As is common in such interventions, the filtration system broke and has yet to be repaired. This, too, contributed a real-world example to my understanding of the role of humanitarian aid and NGO work in the developing world, as well as considerations of sustainability.

My overall experience in Peru was one of warmth, adventure, and often simplicity. I had far fewer clothes, my smartphone use was limited to areas with WiFi, and the culture was friendly enough that I could wander into the main squares in Iquitos, listen to the beat of whatever music group was playing that day, and find myself in conversation with either another tourist from some far-flung place or a friendly local. The lab team was effortlessly welcoming, taking in my broken Spanish and frequently failing attempts at jokes with a smile. Zoila, one of the women who worked in the lab, brought us to her home and subsequently on an adventure into the middle of the jungle that involved trekking through mudpits barefoot in search of aguaje, a native fruit frequently peddled on the sides of streets. On our way back, our open-air canoe (which looked essentially like a hollowed tree) was almost submerged in a heavy rainfall – being so at the mercy of the earth and its whims was both invigorating and humbling, especially when I stopped to consider what that was like for people whose livelihoods could be affected by such storms. The roads between the small communities and Iquitos were rocky dirt ones, and as such became virtually impassable during heavy rain. For me, this was an annoyance: I had to pay a little extra for a private taxi on a longer route. For those who depended on access to town to sell things and lived on an income of $100 a month, these extra soles added up quickly. My exposure to some of this need and poverty was not new, but is always a welcome reminder to check my own privileges and remember alternate perspectives.

It’s been some time since I returned but I still think fondly of my strange jungle city, with its rambling roads, almost endearing grit and the constant watching presence of the wide river. I carry its thumping beats, its rugged streets and the smiles of my Peruvian friends with me every day. My experience there has given me a more hands-on appreciation of the complicated nature of water access as well as an appreciation of its importance in overall health. Although I’m not certain where my career goals lie, I still hope to find a way to help ameliorate socioeconomic health disparities, and hope that this experience can help me do so.

Doesn’t get more “Iquitos” than this! Here I am modeling a “Juane”, the typical food of Iquitos, which is a mix of rice and chicken cooked in a banana leaf, while sitting on a boat on the Amazon river: 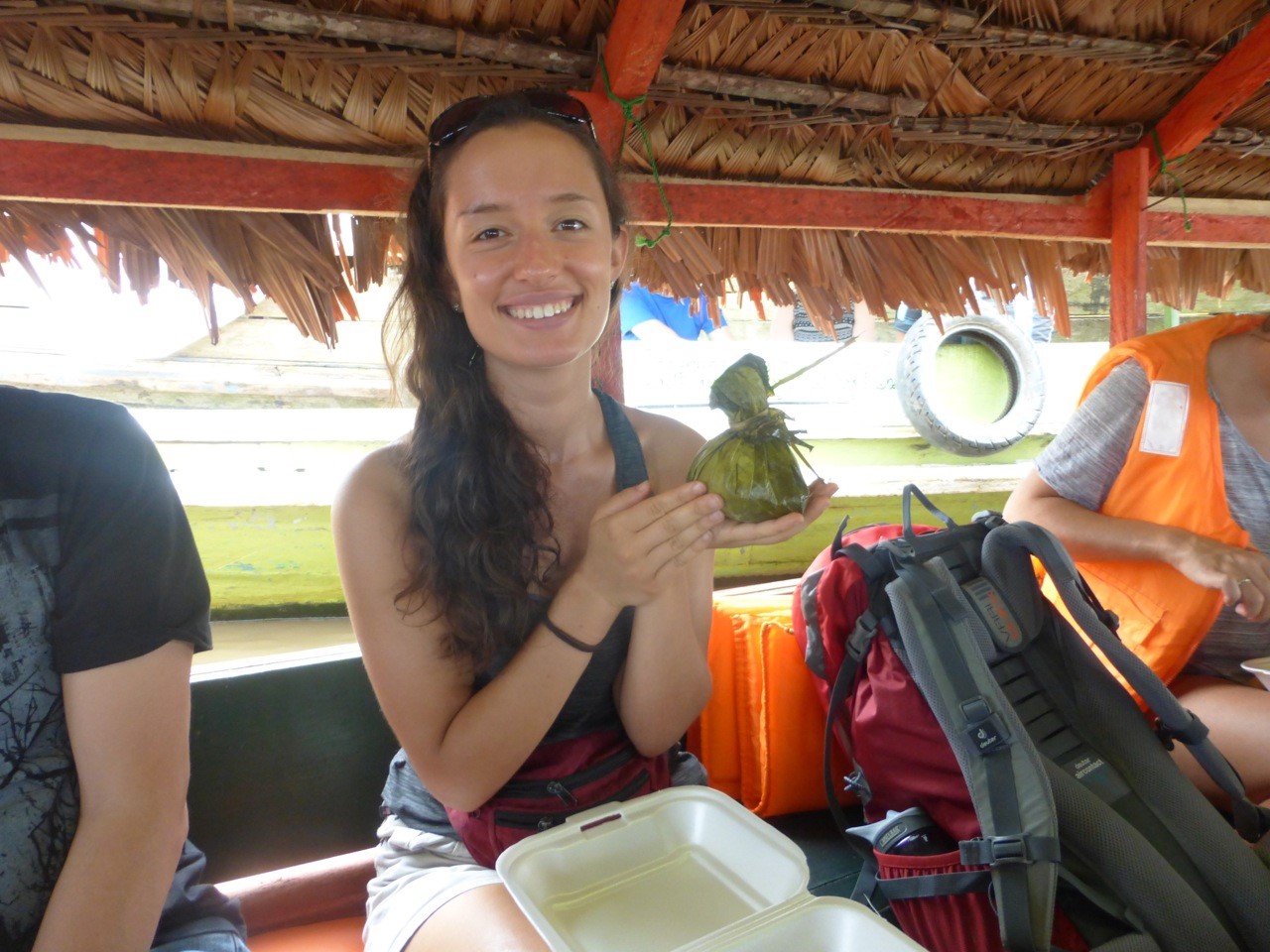 Angela and I on board a boat going down the Amazon river! 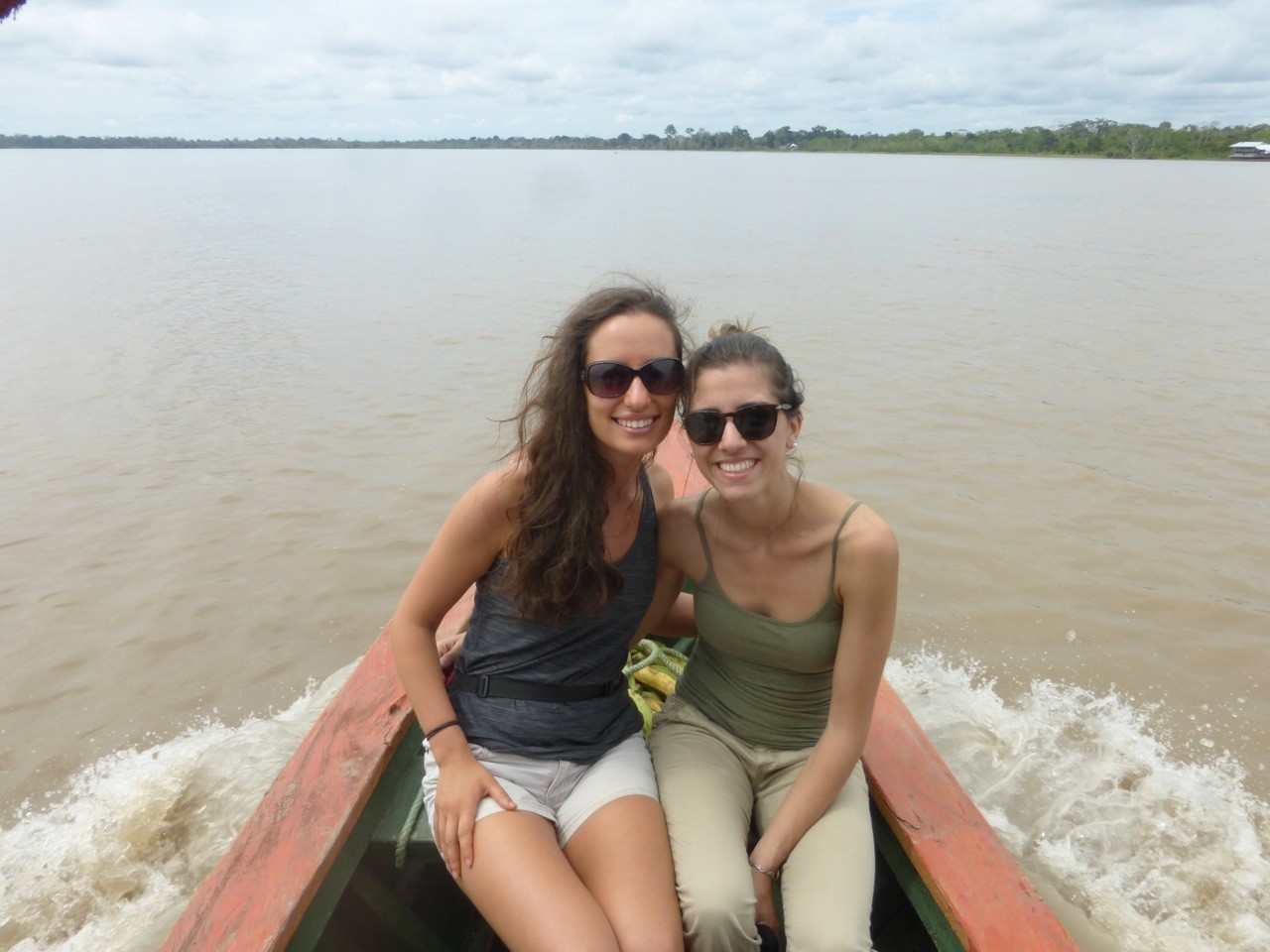 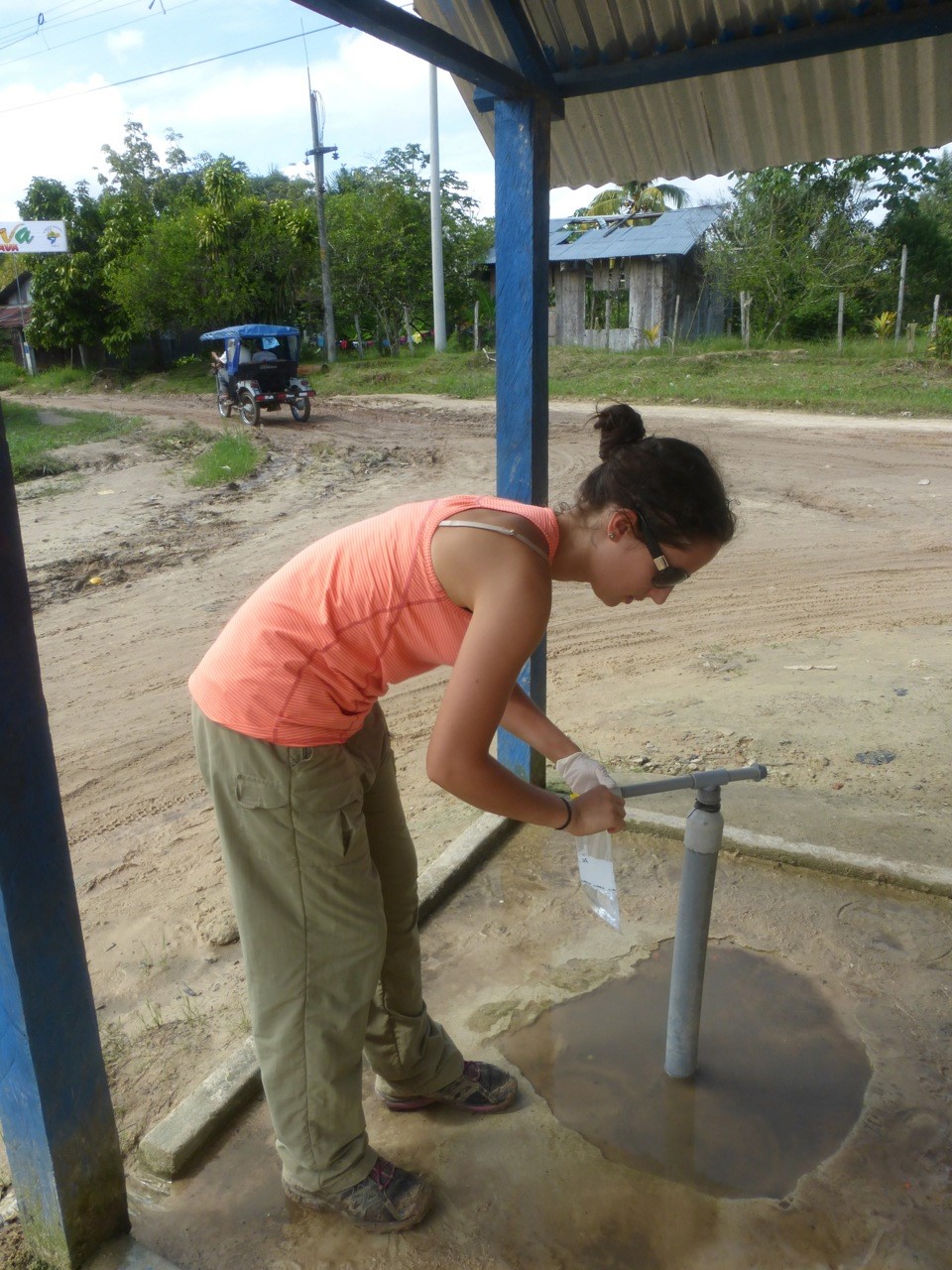 Processing water samples at the laboratory in Iquitos, looking for fecal contamination as indicated by presence of coliform bacteria: 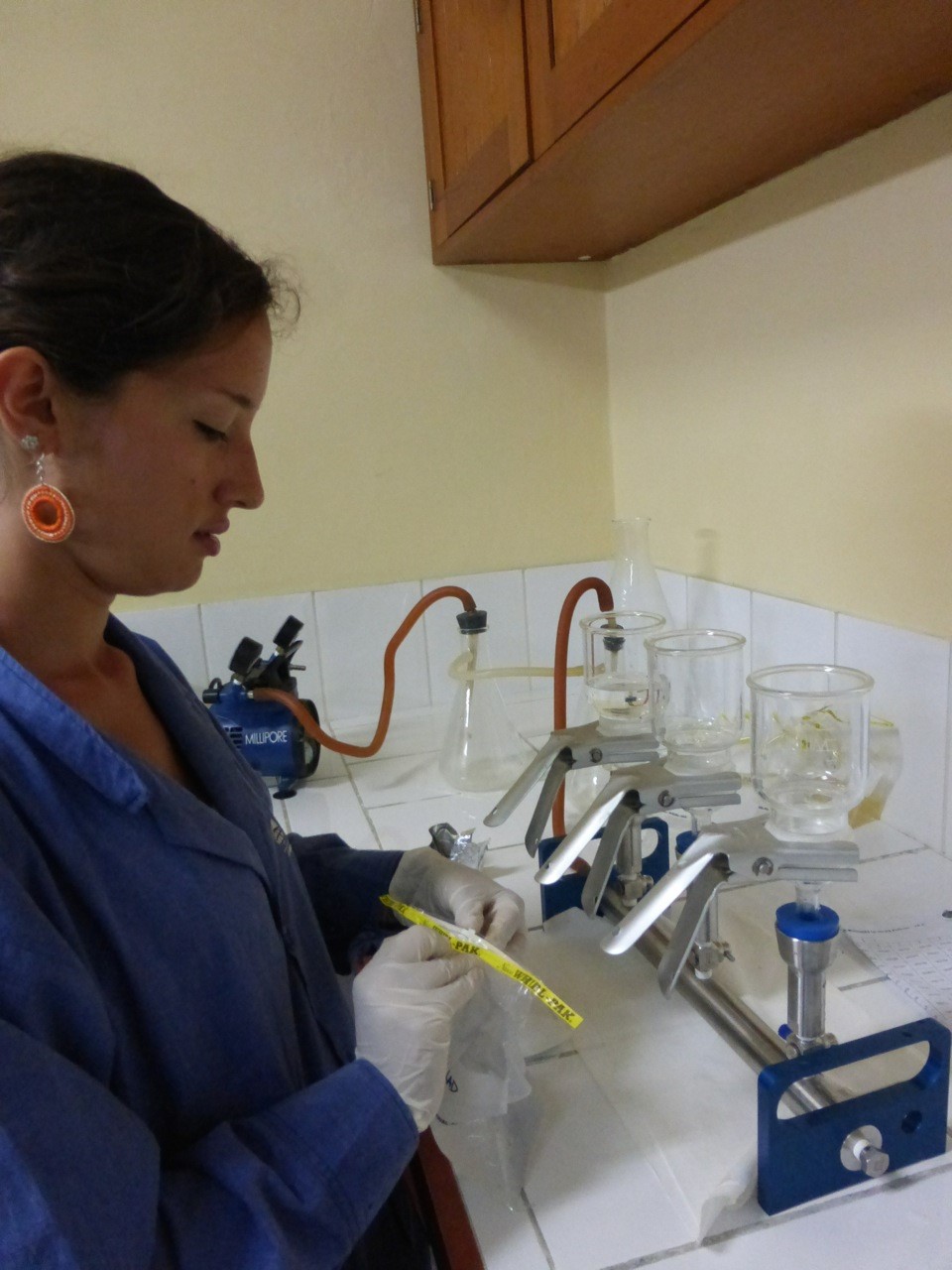 All of the amazing field staff in Santa Clara de Nanay! 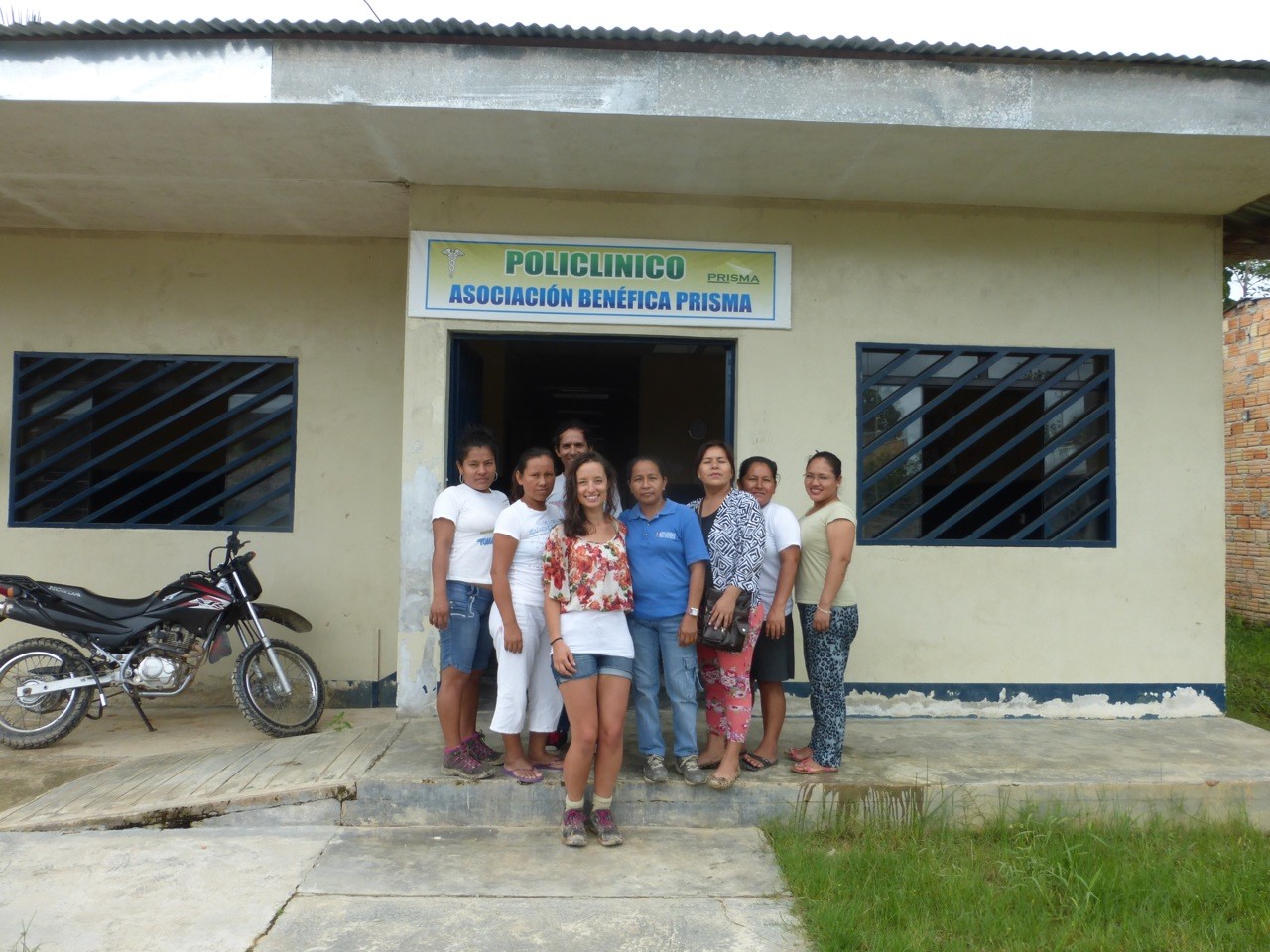